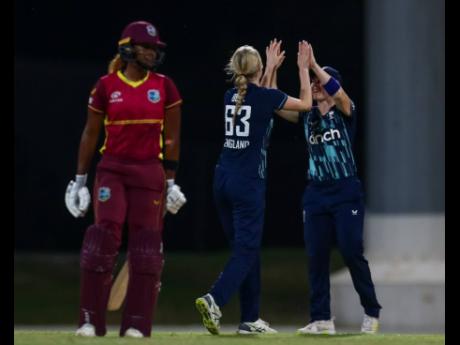 CWI Media
West Indies’ Hayley Matthews (left) walks away as Lauren Bell (centre) celebrates taking her wicket during the first game of a three-match One-Day International Series against England at the Sir Vivian Richards Cricket Ground in Antigua on Sunday.

THE WEST Indies Women lost the second One-Day International (ODI) of a three-match series against England in the Caribbean by exactly the same margin as they lost the first.

Playing at the Sir Vivian Richards Cricket Ground yesterday, the West Indies lost by 142 runs, skittled out for 118 inside 32 overs as they went in chase of England’s 260.

Batting first, England amassed the total in 48.1 overs thanks to half-centuries from Amy Jones and Sophia Dunkley.

Jones scored an unbeaten 70, while Dunkley racked up 57. There were also useful innings from Heather Knight, who scored 25, along with Emma Lamb, who clocked the same tally.

The four scored their runs against West Indies skipper Hayley Matthews, who ended with figures of 3-50, and Afy Fletcher, 2-41.

In reply, the West Indies were buoyed by Rashada Williams’ unbeaten 54, but nobody else managed any score of significance against Lauren Bell’s 4-33 and Sophie Ecclestone’s 2-25.

“I’m very disappointed. In both games we never batted. In the first game I don’t think we bowled as well as we could have. We let a lot of chances slip at crucial points in the game,” said Walsh.

“In the second game we were better with the ball on what I thought was a good batting track. With the score that we had them for, I thought we would have had a better approach batting, but we lost a couple of early wickets and just never recovered.”