‘All the questions shouldn’t be about him’ 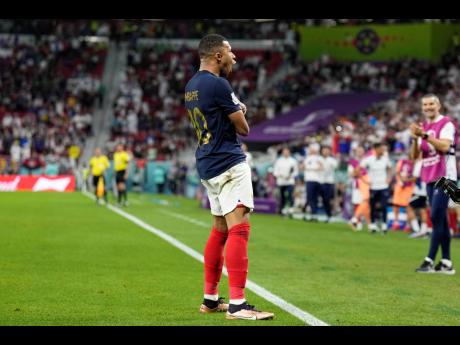 AP
France’s Kylian Mbappé celebrates scoring his side’s third goal during the World Cup round of 16 football match against Poland at the Al Thumama Stadium in Doha, Qatar, on Sunday. 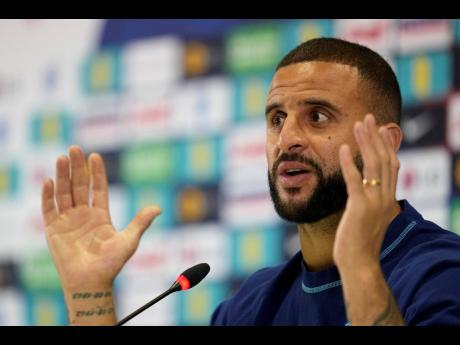 WITH FIVE goals at the World Cup so far, Kylian Mbappé is living up to his reputation as the man best-placed to succeed Lionel Messi and Cristiano Ronaldo as soccer’s biggest star.

Spare a thought then for Kyle Walker, who is set to mark the France striker when England takes on the defending champions in the quarterfinals on Saturday.

“I do understand what I need to do and that’s obviously to stop him,” the Manchester City right back said Wednesday.

Walker described Mbappé as “probably” the best player in the world and accepted there is particular focus on how he handles the situation at Al Bayt Stadium. But he believes there has been too much talk about just one player when France has a squad full of world-class talent.

“The game is not England vs Mbappé. The game is England vs France,” Walker said. “OK, he’s a tool they have in their armoury that’s very good, but there are other very good players and we can’t underestimate those players that have won big titles, won big cups. He’s a great player, we all know that. That’s why all the questions are about him, but let’s not forget (Olivier) Giroud, who scored countless goals for France and in the Premier League.

“(Ousmane) Dembele who, for me, is just as good on the other wing, is a very tricky player. Then you’ve got (Antoine) Griezmann and stuff like this. These players can cause you the problems. OK, we take our hat off to him, he is a great player. For me, all the questions shouldn’t be about him.”

Mbappé is aiming to win his second World Cup after his starring role when France won the title in Russia four years ago. He scored four goals in that tournament and has already surpassed that number in Qatar with five.

Walker has come up against the Frenchman three times in the Champions League with City against Paris Saint-Germain, winning twice and losing once. Mbappé only managed to score one goal in those three games – and that was in a 2-1 loss in November 2021.

While France won the title in Russia, England was knocked out by Croatia in the semifinals.

Walker believes the team is better placed to go further this time after reaching the final of last year’s European Championship, which it lost on penalties to Italy.

France, he said, hold no fear for this England team.

“We take our hats off to them. They are world champions. They have the respect they deserve. They won the last World Cup,” Walker said. “But I can assure you that each and every one of us will not be rolling out the red carpet for them to go and perform, thinking it’s a theatre for them to showcase their great talent. We have also got great talent that we need to be speaking about as well.”