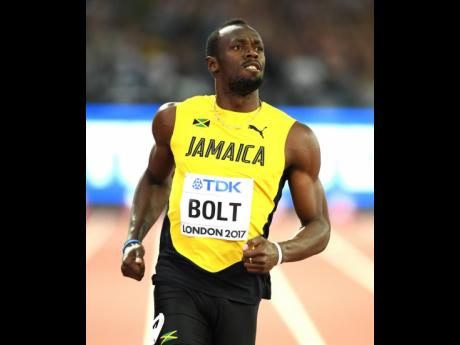 Ricardo Makyn
Usain Bolt at his last World Championships in London in 2017.

JAMAICAN SPRINTING legend, multiple Olympic gold medallist and world record holder in the men’s 100 and 200 metres, Usain Bolt, believes big contracts for young athletes could be hurting rather than helping.

Bolt, while speaking on local podcast ‘Fast Lane Lifestyle’, with host and recently retired sprinter Asafa Powell, said he believes the massive endorsement deals going to local athletes is based, in part, on the foundation set by him and Powell.

“The fact of the matter is that this is true. Few of them are getting a lot more money than we [did] at the start,” said Bolt.

“When we were starting out in track and field, we never got as much money, but when we started to run fast, and do great, we started to make money. But because we’ve set a high standard for Jamaica, when they do well in high school, the sponsors just come in and say, ‘See a big money here’,” said Bolt.

Powell agreed with the sentiment before the eight-time Olympic gold medallist went on to say that the heavy financial incentives at an early age could prove detrimental to the growth and development of the athletes, who are rewarded before they have understood the work it takes to perform at the highest level.

“When they get that money now, they are, like, ‘Oh cool. I don’t need to do anything else’,” said Bolt.

The four-time Laureus Athlete of the Year award winner, who retired in 2017, revealed that he has opted not to give advice to the current crop of athletes unless they approach him because that advice is often misconstrued.

“I’ve reached to a point where if they don’t come to me, I have nothing to say because I used to try and talk to all these younger athletes. I’ve tried to guide them to a level to say, ‘You need to do this and that. You need to train harder and be dedicated’, and it’s, like, a waste of time,” said the 100m and 200m world record holder.

The 36-year-old Bolt further stated that he settled on his decision to keep his comments close to his chest after athletes refused to communicate with him after he dished out what he had hoped would be taken as motivation.

“A few of them (athletes) don’t even talk to me anymore because when I tell them the blunt truth and say ‘You’re not going to make it if you keep this up (lack of training)’, they feel like you’re hating against them. If you don’t do anything to back that contract up, we know this: it’s going to get cut.”