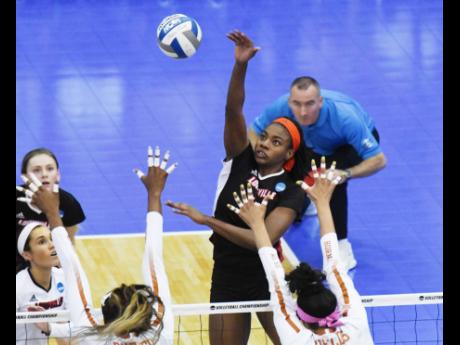 WITH ITS share of the Atlantic Coast Conference (ACC) title safely tucked away, the University of Louisville go into the round of 16 in the 2022 NCAA women’s volleyball championships today, facing off against Baylor University.

The Louisville team, with Jamaican Aiko Jones making a steady contribution, has beaten its last four opponents in straight sets.

Jones, a former captain at Wolmer’s Girls’ School, led all her teammates with 11 kills, two aces, and two blocks as they hammered Samford University in their first NCAA elimination match 25-9, 25-13, 25-13 on December 2. A day later, Purdue University got the same treatment, with Jones chipping in with five kills, one ace and two blocks.

“I’m really proud of our team. I felt like we had a lot of pressure on us,” she said. “That’s the first time we’ve ever really played with that type of pressure,” Kelly added, evaluating an effort that vaulted Louisville to a round of matches in the NCAA Regionals.

Her team’s ACC performances have made Louisville the number-one seed for the NCAA tournament, with the University of Pittsburgh seeded at number two.

Near the end of the ACC competition, Jones and her teammates shifted gears from being merely dominant to being merciless.

The Cardinals haven’t dropped a set since then. North Carolina, Pittsburgh, and Notre Dame were all defeated 3-0 in a run of victories that clinched a share of the ACC title. Overall, including the NCAA wins over Samford and Purdue, Louisville has compiled a 28-2 record this season, with 20 of those wins coming without a set lost.

Jones reached a significant milestone when she scored her 1,000th career kill for Louisville Cardinals against North Carolina on November 6.