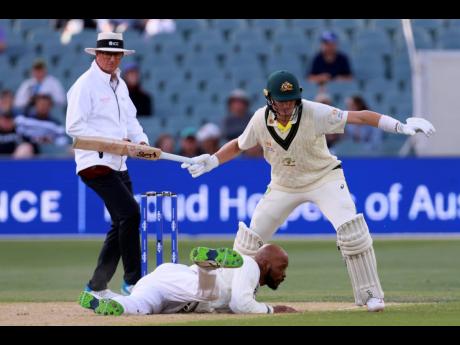 AP
West Indies' Roston Chase (bottom) dives on the ground while fielding as Australia's batsman Marnus Labuschagne (right) looks on during the opening day of the second Test match in Adelaide, Thursday, November 8, 2022.

ADELAIDE, Australia (AP): Marnus Labuschagne and Travis Head posted unbeaten centuries in a 199-run stand to lead Australia to 330-3 against West Indies at stumps on day one of the second cricket Test on Thursday.

Labuschagne scored his third century in as many innings against West Indies and was 120 not out at Adelaide Oval.

Head was 114 not out after making his first Test century on his home ground in the day-night match.

Both teams made injury-enforced changes following Australia’s 164-run win in the series-opener in Perth last weekend. Marquino Mindley, one of three changes for the depleted West Indies, left the field with a hamstring strain after bowling just two overs on debut.

The Australians got on top early after stand-in captain Steve Smith won the toss and opted to bat first.

Usman Khawaja shared a 34-run opening stand with David Warner (21) and 95 with Labuschagne for the second wicket before his dismissal for 62 triggered the only slight wobble in Australia’s innings.

Part-time seamer Devon Thomas was the unlikely bowler to break the second-wicket stand, trapping Khawaja leg before wicket with the first ball of the 42nd over.

Khawaja, who surpassed 1,000 Test runs in the calendar year when he reached 42, was given out and immediately reviewed the decision, but the third umpire confirmed the dismissal and Australia were 129-2.

In the next over, former skipper Jason Holder took a return catch off his own bowling to dismiss Smith for a rare duck as Australia lost two wickets for two runs in 11 deliveries.

But Labuschagne, the No. 1-ranked batter in Test cricket, and Head counterattacked in quick time, restoring Australia’s dominance.

Labuschagne cut Thomas to the point boundary to raise his 10th century in his 30th Test, and third in succession in this series following his 204 and 104 not out in Perth. He’s just the 10th batter to post two triple-figure scores immediately after a double-century and only the second Australian.

West Indies skipper Kraigg Brathwaite cycled through seven bowlers in pursuit of a wicket on a pitch that favored the bat, with only Alzarri Joseph (1-81), Holder (1-42) and Thomas (1-43) getting any rewards.