I’ve Got Magic to slam rivals on Sunday 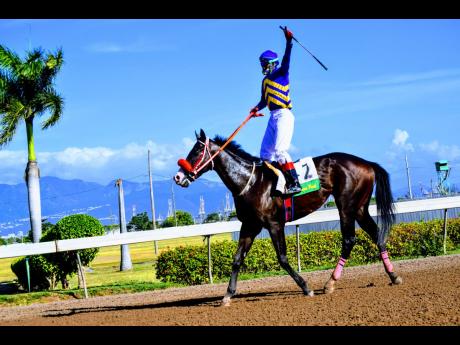 File
I’VE GOT MAGIC with Everton Miller aboard. File

I’VE GOT MAGIC is down two classes from his brave Mouttet Mile run last Saturday, finishing down the track in 10th place - a quarter-length off ATOMICA and seven behind stablemate EXCESSIVE FORCE - who ran through inside the last half-furlong to upset the $18 million applecart.

Never worse than fifth down the backstretch, I’VE GOT MAGIC left the half-mile marker two lengths behind MAHOGANY, RUNAWAY ALGO and ATOMICA with SHE’S MY DESTINY running along the rail in fourth.

I’VE GOT MAGIC’s effort in the Mouttet Mile was his second consecutive big run against EXCESSIVE FORCE, finishing five and a half lengths behind his stablemate at six furlongs three weeks earlier in the Port Royal Sprint on Jamaica Cup Day.

Among five topweights in Sunday’s Ahwhofah Sprint, I’VE GOT MAGIC appears woefully out-of-class, his last victory being an open-allowance win over RUNAWAY ALGO and FURTHER AND BEYOND in the Seeking My Dream Trophy in May.

I’VE GOT MAGIC had been working superbly ahead of the Mouttet Mile and should carry that form into Sunday’s race against weaker rivals.

BLUE VINYL finished ahead of I’VE GOT MAGIC in the Mouttet Mile but made his bid from off the pace whereas Feanny’s runner was never more than four lengths off the cracking pace for the first six furlongs.

Sitting level at 126lb with I’VE GOT MAGIC, BLUE VINYL will be outsprinted by the foreigner, who has no MAHOGANY, RUNAWAY ALGO, ATOMICA or SHE’S MY DESTINY to contend with on the lead.