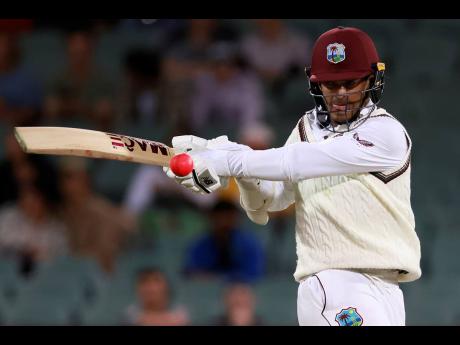 AP
West Indies’ Tagenarine Chanderpaul on the go against Australia on the second day of the second Test match in Adelaide, Australia, yesterday.

West Indies were once again left indebted to Tagenarine Chanderpaul’s tenacity, the rookie left-handed opener producing another solid knock in only his second Test, to prop up an unsteady reply on yesterday’s second day of the final Test against powerhouses Australia.

With West Indies facing yet another mammoth total after Australia declared on 511 for seven about 35 minutes before tea, the unflappable 26-year-old son of Test legend Shiv Chanderpaul carved out a determined unbeaten 47 to steer his side to 102 for four at the close.

Heading into day three of the pink-ball affair at Adelaide Oval, West Indies trail by 409 runs and much of their survival will depend on the left-handed opener who has already faced 98 balls and struck three fours and a six.

No other batsman managed to pass 20 as seamer Michael Neser snatched two for 20 from nine stingy overs to keep West Indies on their toes.

Australia earlier owed their dominance to century-makers Travis Head (175) and Marnus Labuschagne (163) who extended their fourth wicket stand to 297 before being separated.

Head, a 28-year-old left-hander playing before his home crowd, faced 219 balls in a shade over five hours and 30 minutes and counted 20 fours after resuming on 114 while Labuschagne, already with hundreds in both innings of last week’s first Test, counted 14 fours in a knock spanning 305 balls and nearly seven hours and 30 minutes after picking up from his overnight 120.

Resuming the afternoon on 330 for three, Australia kept West Indies without success for the first hour as Head and Labuschagne dominated their inexperienced attack.

In the end, it took Devon Thomas’s medium pace to break the stand with lunch on the horizon, the debutant (2-53) getting Labuschagne to edge a drive at a wide one, wicketkeeper Joshua Da Silva snaffling an excellent catch standing up.

Head followed in the third over after the interval when he was sent back by Cameron Green in a mix-up over a second run, and run out at the striker’s end at 442 for five.

Faced with a testing period before tea, West Indies survived the five overs to reach 14 without loss, Chanderpaul and captain Kraigg Brathwaite (19) then extending their opening stand to 35 following the resumption.

Brathwaite was the first casualty, nicking a defensive prod at Neser and falling to a catch at the wicket, his dismissal triggering a slump as three wickets tumbled for 15 runs in the space of 46 deliveries.

Shamarh Brooks, put down on eight by Neser on his follow through, perished without adding in the bowler’s next over caught at the wicket with 10 runs added. And vice-captain Jermaine Blackwood drove a tame return catch to off-spinner Nathan Lyon for three in the second over following the drinks break, as West Indies tottered.

Chanderpaul found an ally in Thomas, the pair keeping Australia’s attack at bay by posting an invaluable 40 for the fourth wicket.

Following scores of 51 and 45 in Perth, Chanderpaul once again stacked up well, employing a sturdy defence, but also loosening the shackles by clearing the ropes at mid-wicket with Lyon and stylishly slashing Neser over point to the boundary.

The close was beckoning when Thomas played on to seamer Green, leaving nightwatchman Anderson Phillip, in only his second Test, to nervously see out the day with Chanderpaul.