McConnell to practise on ice for next rallycross race 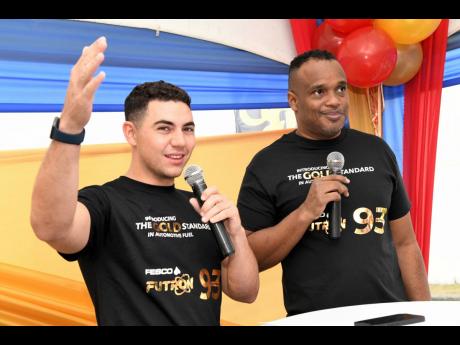 Jamaica’s driver, Fraser McConnell, will be going to Europe early next month to practise racing on ice, in preparation for the next leg of the Nitro Rallycross Championships, which is scheduled for January 20-21 in Trois-Riviéres, Québec, Canada.

McConnell, who hosted the launch of the Future Energy Source Company (Fesco) Limited’s Futron93 octane gasolene yesterday at the Beechwood Avenue service station, stated that his team would be working for a positive result on the ice in Canada, which he has no experience of driving on.

“The next event is in January in Québec and it’s going to be the first time, apart from bobsled, a Jamaican is racing on ice, so we are getting strut tyres, going out on the frozen tracks. It’s something I have never done before, so it’s hard to know what to do, but I am going to go out there and trust my instincts, just bring the car home in one piece and try to advance as fast as I can,” McConnell said.

“We have guidance in the team for the whole series and have people who have done it in the past. With that experience, we know putting the experience with the talents that we have, we can perform.

“I am going up to Finland at the beginning of January before the race to get some practice because we don’t really have ice down here (Jamaica) to practise, but we will be going out there and representing Jamaica to the fullest as usual and showing them that we can do great things,” he continued.

Six races, of the nine-race series, have already been completed and McConnell currently lies third in the title race after winning the fourth leg and having podium finishes in other legs. He believes the practice on ice will enhance his chances in the seventh event and increase his probability of capturing the overall title.

“We had a fantastic win in round four and have been fighting right at the heels of the front runners. If we are not in second and third, we are winning, putting in the fastest lap times every weekend and being the pacesetter.

“It’s the best drivers in the world when it comes to rallycross racing in Nitro and I am right up there with them and showing Jamaica that we got it,” McConnell said.

He stated that it continues to be a joy to represent Jamaica with the national flag on his helmet, shoes and car guard, while he will be working to improve to make Jamaicans proud.

“To go out there and put the country on such a world stage, for me, it’s priceless and every time I am driving it’s a joy and to go out there and win in that competitive field, it’s just an incredible feeling.

“I am my harshest critic, so I always want to do better. Every time I go out there I am looking for improvement and I can never be good enough. There is always room to grow and room to be faster,” he said.