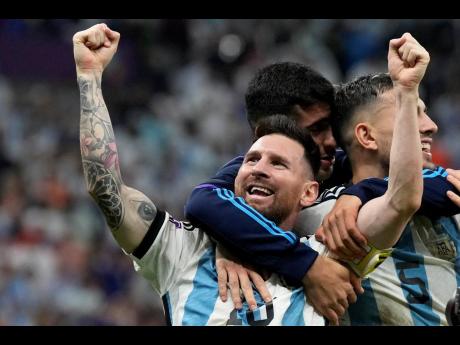 AP
Argentina’s Lionel Messi celebrates at the end of the World Cup quarterfinal match between the Netherlands and Argentina, at the Lusail Stadium in Qatar yesterday. Argentina won 4-3 in a penalty shootout.

Lionel Messi and his teammates hung around on the field for 20 minutes, taking turns dancing and jumping up and down in front of their celebrating, scarf-waving fans.

After Lautaro Martinez scored the clinching penalty, Messi – with his arms outstretched – sprinted to jump into the arms of his goalkeeper.

The match finished 2-2 and was only taken to extra time after the Netherlands equalised in the 11th minute of second-half stoppage time with the second of substitute Wout Weghorst’s two goals.

Before that, Messi had set up the opening goal by Nahuel Molina in the 35th before converting a penalty to make it 2-0.

Argentina will play Croatia in the semifinals on Tuesday after the 2018 runners-up beat Brazil earlier yesterday.

It is only the second time Argentina have reached the last four since 1990. In 2014, Messi was part of the team that lost to Germany in the final.

He looks in the mood to get there again in a tournament that he is turning into his own personal highlight reel.

He delivered a mesmerising piece of skill and vision to set up Molina’s goal, twisting free and bursting forward from central midfield before delivering a no-look reverse pass for the defender to poke in a finish.

His penalty was his fourth goal of the tournament, taking him to 10 overall in the World Cup – tied with Gabriel Batistuta for the most for Argentina. Messi now has 94 goals in total in his 169 international games.

The game featured 17 yellow cards – a record for a World Cup game – including one for Messi, who had blood coming from his upper lip at one stage of an extra time that was dominated by Argentina.

Enzo Fernandez hit the post near the end of extra time and was the only Argentina player to fail to score in the shootout. Martinez’s saves were from attempts by Virgil van Dijk and Steven Berghuis, after which he pulled his shorts high and danced a jig.

The loss ended Louis van Gaal’s third stint in charge of the Netherlands and Messi shared a moment with the 71-year-old coach at the end.