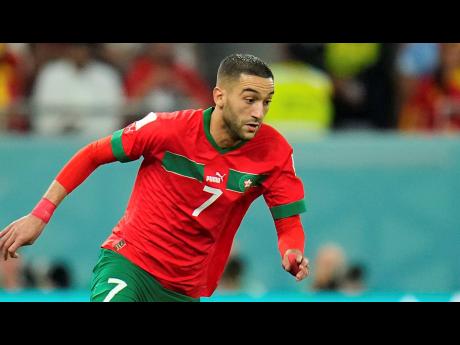 These really are pinch-yourself times for Morocco: A first-ever spot in the quarterfinals of a World Cup – the first to take place in the Arab world, no less – and now a meeting with Portugal and their superstar striker, Cristiano Ronaldo.

Because Ronaldo has again managed to steal the spotlight in his inimitable way, even bumping Morocco’s historic run to the last eight off the top of the agenda before today’s narrative-laden match.

Will he start, or won’t he? That’s the big question being asked about Ronaldo after he was dropped by Portugal coach Fernando Santos for the 6-1 win over Switzerland in the round of 16 on Tuesday.

Not only was the five-time world player of the year relegated to the bench, his replacement – 21-year-old Gonçalo Ramos – scored a hat trick to leave Santos with quite the selection dilemma against Morocco.

“I hope he won’t (play),” Morocco coach Walid Regragui said yesterday of Ronaldo. “As a coach, I know he’s one of the best players in history and so I’d be delighted if he didn’t play.”

The announcement of Portugal’s team about 90 minutes before the game at Al Thumama Stadium is keenly awaited as Ronaldo prepares to play in the quarterfinals of the World Cup for just the second time in his glittering career.

Santos declined to share selection thoughts yesterday for what he said would be a different kind of game to the one against Switzerland, while noting that “90 per cent of the questions” are about Ronaldo at Portugal’s pregame news conferences.

Portugal are at this stage for only the third time after 1966 and 2006, perhaps surprising given the talent to have come from the country down the years.

Four years ago, Portugal lost in the round of 16 to Uruguay, though a group-stage game against Morocco was “possibly the most difficult match” the team faced, Santos said yesterday.

As for Morocco, the nation is in uncharted territory after becoming only the fourth African country to reach the quarterfinals at football’s biggest tournament, after Cameroon (1990), Senegal (2002) and Ghana (2010). None of them reached the semifinals.

Morocco are also the only team from outside Europe or South America to make it to the last eight in Qatar.

Morocco fans poured into the streets of European cities to celebrate the team’s passage to the quarterfinals, which came after Morocco advanced from a group containing second-ranked Belgium and 2018 runners-up Croatia.

Regragui, who was born in France, and 14 of the 26 players in the squad were born abroad – the highest proportion for any team at a World Cup being held in the Middle East for the first time in the tournament’s 92-year history.

The Arab world’s standard-bearer, Morocco are in the quarterfinals on merit, too. The team has only conceded one goal – and that was an own goal against Canada – and is proving so well-organised, with a sturdy back four headlined by Achraf Hakimi, a dedicated midfield anchored by Sofyan Amrabat, two mercurial wingers in Hakim Ziyech and Sofiane Boufal, and a striker in Youssef En-Nesyri, who occupies defences with his relentless work rate.