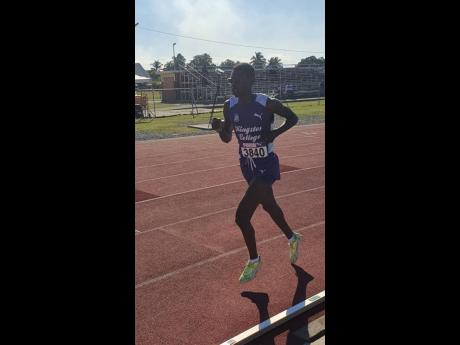 In the decade since the 2000 metres steeplechase was introduced at the ISSA/GraceKennedy Boys and Girls’ Athletics Championships (Champs), Kingston College (KC) have won most of the glory. Five KC boys have stood atop the podium and the school owns the record, thanks to Aryamanya Rodgers and his 2018 winning time of five minutes 49.46 seconds. This season, the keeper of the KC steeplechase flame is Ainsley Campbell who opened his season with a comfortable win last Saturday.

Running at the Central Hurdles and Relays meet on the grounds of the GC Foster College for Physical Education and Sport, Campbell moved easily away from the field and won in six minutes 24.69 seconds. The bespectacled winner wanted to go faster but wasn’t devastated by the time.

“Could be a little bit better but we take it. We move forward,” he said while catching his breath.

His teammates Schevorn Wardlow and Peter Clarke were second and third in 6.44.02 and 6.52.31, respectively.

“We look forward to the Boys and Girls’ Athletics Championships and we move forward,” Campbell added.

The steeplechase was first run at Champs in 2012 and San-J Powell of Kingston College won the first gold medal before completing a stunning double in the Class One 800 metres. The next KC win came in 2017 courtesy of Shane Buchanan and kicked off a period of dominance. Rodgers’ 2018 win lowered the meet record – 5.53.41 – set by Thaleetio Green of St Jago High School and after an interruption by Calabar’s Rivaldo Marshall in 2019, Kirk Dawkins and Gianni Henry have won the last two gold medals on offer.

Underlining the superiority designed by KC’s middle- and long-distance expert Hamlin Pagon was a one-two finish by Buchanan and Kristoff Darby in 2017.

Campbell wears the mantle easily as he expects to take each race as it comes.

“I wanted to run like 16s”, he commented about his time on Saturday, “but, it’s the first one, so we’ll get race sharp after that.”

Asked why he chose a discipline dominated by Kenyans at the international level, he explained: “It wasn’t a specific choice, but the coach recommended it and I said I’ll give it a try.”

His long legs may have chosen the event for him as he had no trouble clearing the barriers during his victory run at GC Foster.

Holmwood Technical is the other school with multiple wins in the Champs steeplechase. In fact, Holmwood triumphed in the event three years in a row, with success for Rodney Henry in 2013, Obrian Frith in 2014 and Daniel Glave in 2015.

Frith was the first to break the six-minute barrier at Champs. He clocked 5:59.70 when he took his gold medal.