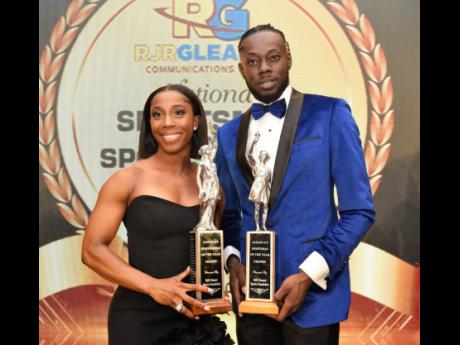 Ian Allen
Shelly-Ann Fraser-Pryce (left) and Rasheed Broadbell with their RJRGLEANER Sportswoman and Sportsman of the Year trophies at The Jamaica Pegasus hotel last Friday.

The victories for five-time World 100 metres champion Shelly-Ann Fraser-Pryce and Commonwealth Games 110m hurdles champion Rasheed Broadbell at the RJRGLEANER National Sportsman and Sportswoman of the Year Awards has put the spotlight on the Elite...

The victories for five-time World 100 metres champion Shelly-Ann Fraser-Pryce and Commonwealth Games 110m hurdles champion Rasheed Broadbell at the RJRGLEANER National Sportsman and Sportswoman of the Year Awards has put the spotlight on the Elite Performance Track Club where both train.

It has been a strong year for the club led by head coach Reynaldo Walcott who has welcomed more athletes into the fold including World Championships 4x100m silver medallist Kemba Nelson and World Under-20 100m hurdles champion Kerrica Hill. While cognisant of the difficulties the coach faces in deciding who joins the fold in the future, Fraser-Pryce is pleased to see how much the club has grown in the last two years

“Whenever we have good results where coaches are producing good athletes people will want to come. But the reality is that he can’t take everyone. So he will have to decide that for himself when that time comes,” Fraser-Pryce said. “But we are glad that as a club we continue to grow and people are excited about joining the group and it speaks to Mr Walcott’s experience and what he has done over the last couple of seasons.”

Fraser-Pryce switched from MVP to Walcott in 2021 and under him, she clocked her personal best time of 10.60 seconds in her first year en route to silver in the Tokyo Olympics and completing a 2022 campaign where she won her fifth World 100m title in a championship record performance of 10.67, one of her seven sub-10.70 clockings that year. With the constant belief from years prior of his ability, Fraser-Pryce says she is happy to see Walcott emerge as one of the sought-after coaches in the country

“I’ve always told him that he is going to be a super coach and I am glad that I am able to able to witness it,” Fraser-Pryce said.

What Fraser-Pryce is also happy to witness is the growth of her clubmate Broadbell after a season where he broke through to be the third Jamaican to go under 13 seconds in the 110m hurdles and win the Commonwealth Games title last August.

“Congrats to Rasheed. I am glad that he finally got his foot in and I think as a group that’s what we are all about, making sure we hold each other accountable,” Fraser-Pryce said. “We are excited as a group. The group has grown a bit since the last few seasons and we are excited to welcome new athletes who want to learn and have a good time. We had a great season as a team and we are looking forward to an even better season (in 2023).”