Big 2023 with Paris just over the horizon 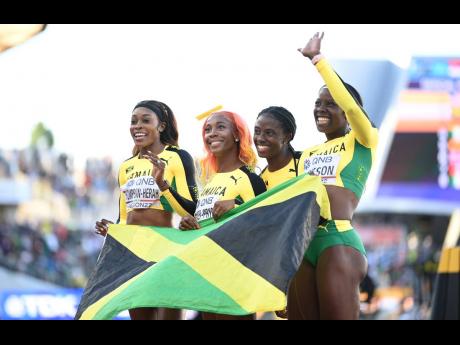 TWO THOUSAND and twenty-three began with the Hockey World Cup and now the FIFA Women’s World and Netball World cups are just months away.

As a track and field fan, I can barely wait for the World Athletics Championships which will arrive this August in Budapest, Hungary.

The FIFA World Cup, the Netball World Cup and the World Championships are even bigger because Jamaica will shine in these tournaments.

With Khadija Shaw banging in goals for Manchester City, the Girlz may be able to do what our 1998 men’s team and the 2017 women’s team couldn’t – advance to the knockout stage.

The Sunshine Girls may well be on the verge of something big. Last year’s Commonwealth Games silver is the nation’s highest honour in international netball and, not only is captain Jhanielle Fowler the finest shooter in the game, but she is surrounded by a classy team.

Budapest is another opportunity for our athletes to make history. Shelly-Ann Fraser-Pryce is already the most successful 100-metre sprinter ever, with five world and two Olympic titles. To win again, she will have to beat 200-metre World Champion Shericka Jackson and the 2016 and 2021 Olympic 100/200 champion Elaine Thompson Herah.

My head is spinning. Will Sydney McLaughlin stay with the 400 hurdles and take the record closer to 50 flat? Will Slovenia’s Kristian Ceh move the discus record – 74.08 – off the record books and will Tajay Gayle come back to 100% and challenge Mike Powell’s 1991 monument of 8.95 metres?

Even so, my mind keeps peeking over the horizon to Paris.

Twenty-six years ago, I was there making notes at trackside at the 1997 World Indoor Championships. The highlight was a 1-2 performance that announced Jamaica as a major sprint hurdles power. Fast-starting Michelle Freeman zipped to gold, with Gillian Russell-Love, a close second.

Weeks before her 34th birthday, Juliet Cuthbert showed she still had her Olympic silver medal speed with second place in the 200. Our 4x400 men’s team – Linval Laird, Michael McDonald, Dinsdale Morgan and Greg Haughton – won the silver medal. In those days, baton passing wasn’t ordered by the team’s position in the last curve on the previous leg. It was chaos and Russian Ruslan Maschenko bodychecked McDonald before Laird arrived. It was a miracle our baton got around.

The 2024 Olympic 100 metres has my attention. There are four women who have taken it twice. Two of them, Fraser Pryce and Thompson-Herah, have the opportunity to leave Devers, the 1992/1996 lean queen and 1964/1968 winner Wyomia Tyus behind by becoming the first female sprinter to win three times.

At the same time, Jackson could stand atop the podium twice. She’ll be 30 then and may well be at the height of her powers.