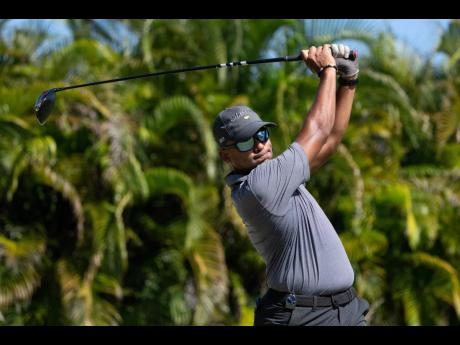 Photograph by LAAC
William Knibbs of Jamaica plays a stroke from the No. 13 tee during Round One of the 2023 Latin America Amateur Championship at the Grand Reserve Golf Club in Puerto Rico on Thursday, January 12, 2023.

“Oh, that was fantastic, because I guess being part of the first group out on the second day, I spent the whole day one watching the cut line move from must making it, to me trying to sneak in there, so I kind of felt the whole range of emotions, in like, am I going to make it or not, so that was pretty cool,” he said. Knibbs was participating in the championships for the second time, having made his debut back in 2022 where he ended a disappointing 83rd.

According to Knibbs, while pleased, he saw where there could have been improvement.

“I was pleased for the most part. I struck the ball really well and I gave myself a lot of birdy chances. I didn’t necessarily capitalise on all of them but I was happy with certain aspects of my game. At the same time, I know they’re areas where I need to improve on, so that’s cool to know that you have something to work on,” said Knibbs.

Despite the 52nd-placed finish, one of the best ever out of Jamaica, Knibbs said there were obvious errors that he made on the course which, if corrected, could have propelled him to a better performance.

“The next upcoming championship, for me, will probably be the National Championships, and that will be around May or June, so I’m just going to keep on practising and keep on improving and see if I could add another title to my resume,” Knibbs concluded.