Water is a 'pipe dream' for Hanover communities 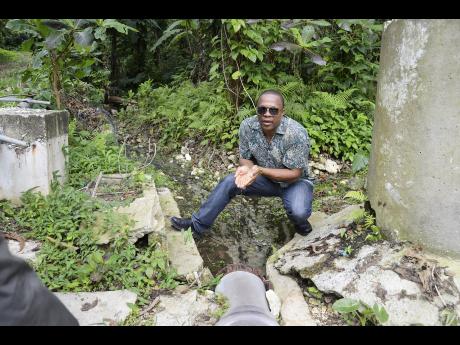 FILE In this 2013 photo, Councillor of the Cauldwell Division, Anthony Walker squats between the head of the Kendal Spring and the water catchment pipe at the Kendal Treatment Plant.

Councillor of the Cauldwell Division in Hanover Anthony Walker says hundreds of households in his division are still without piped water due to what he says is the prohibitive cost of initial connection required by the National Water Commission (NWC).

Walker said the three affected deep-rural communities, Top Kendal, Cessnock, and Lower Rock Spring, have had water supply returned within the last two years under his watch, after many years of being without, but that many residents are still unable to gain access as they are unable to afford the minimum $15,000 upfront payment for installation and connection .

"I had three community meetings recently with the folks, and while they are happy to know that they now have running water, the challenge that they are having is getting connections to their homes. A lot of people cannot afford the initial connection. It is costing $20,000 minimum to get a connection. It is $15,000 for the initial connection, plus if they have to use something that they call saddle, depending on the size of the main that the water is in, there is an additional $5,000 at least," Walker told Western Focus.

"It is unfair to have these communities without water in their pipes and they cannot afford the connection. It is too much. Life is already difficult. We are having a problem," he stressed. "A lot of people just cannot afford it and they honestly want to do it legally."

Under the National Water Commission Act, a contract for water supply requires that customers pay the cost for pipes, fittings, labour, and all other costs associated with the installation and connection of a supply to their premises. Customers are also mandated to make a deposit on their account at the time of service request to cover water charges.

Walker said while there are two standpipes within the areas, residents say they prefer to have water within their homes, in keeping with modern living. He also said he was personally against persons having to undertake the burdensome task of carrying buckets of water from long distances to their homes and that standpipes are usually subject to abuse and water wastage and should become a thing of the past.

"My recommendation to the NWC is to have them (customers) pay a smaller first-time deposit and filter the balance of the $15,000 in their monthly bill over a period. The commission can do a breakdown - and I think it would work, because, why have the water there and you cannot collect for it to improve your revenue? More people would be willing and able to do their legal connection.

"I am 100 per cent sure there are people who are connected to the system illegally. While I don't support this, you can't blame them because it is too expensive to get the thing the right way," Walker argued.

The first-time councillor said the NWC could garner more revenue and reduce water losses if the utility company accepted his recommendation and applied it islandwide. As such, he said he would be submitting a resolution regarding the matter at the next meeting of the Hanover Parish Council, seeking the support of the other municipalities within the island.

"I am going to do a resolution at the next sitting of the council and ask for support. All my fellow councillors are already in support. I want more people to be able to connect to the system at an affordable cost and NWC to get some revenue while that is being done. Other than that, it doesn't make sense you put water in the communities then," he said.