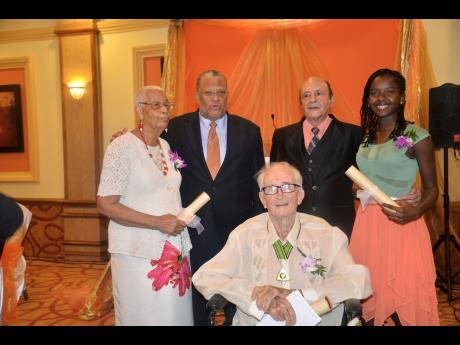 Photo by Barrington Flemming Ambassador and Former Tourism Minister, Frank Pringle (seated) was among four persons who were honoured and awarded by the People's National Party Region Six at the Riu Montego Bay Hotel on Saturday. He is surrounded by other awardess and Finance Minister Dr. Peter Phillips ( second left). Others in photo are: Violet Neilson- Former Speaker of the House of Representatives, Senator Fred Hamaty, and Aysha Simone Brown- granddaughter of Cecil Donaldson Former Mayor of Montego Bay who collected the award on behalf of her grandfather.

Keynote speaker, Minister of Finance Dr Peter Phillips lauded the awardees, stating that they were prime examples of the People's National Party's best. Phillips said the four had worked diligently and unwaveringly for the party and their country and were deserving of the accolades, which were being heaped on them.

"We have to take from these wonderful honourees the quality of perseverance, tolerance and inclusiveness, and purposefulness that they brought to the process of building a new Jamaica," Phillips said.

Violet Neilson was lauded in her citation as an astute and hard worker who fought for the cause of women, while Hamity was praised as a man of integrity and strength. Pringle was hailed as an institution builder, particularly in the area of tourism, and Donaldson was lauded for being a visionary and the chief architect behind Montego Bay being granted city status.