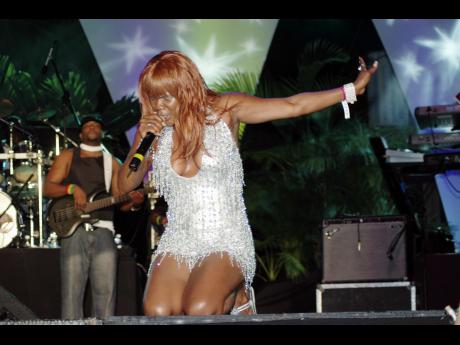 History will be created at the Catherine Hall Entertainment Centre in Montego Bay this Thursday night as for the first time in the annals of the 23-year-old music festival, a female artiste, the sensational Lady Saw, will be the closing act for the much-vaunted Dancehall Night segment.

However, while the exciting Dancehall Night package should prove exciting for the patrons, for the business sector, the big news must be the projection that the festival is expected to generate a whopping US$9 million (more than a billion Jamaican dollars) in earnings for the local economy.

"Based on the Jamaica Tourist Board's projections, they are expecting 6,000 visitors to come to the island for the festival, with the projection that each visitor will spend approximately US$1,500, which equates to just over US$9 million," said businessman Robert Russell, the chairman of Summerfest Productions Limited, the promoters of the annual festival.

With the festival satisfying the dual needs for high-quality entertainment and much needed foreign exchange for the economy, Russell said his organisation is quite happy to be associated with such a positive venture.

"You cannot find a better event to come to and spend a week; Montego Bay is just a part of that magic. It's not just reggae, it's not just Sumfest. It's also Montego Bay and Jamaica as a destination," said Russell.

Despite operating in an economy that is shackled by strict International Monetary Fund (IMF) conditions, the Government has again fully endorsed the festival and is throwing its full support behind it through the Jamaica Tourist Board (JTB), which is a foundation sponsor.

"Putting on this show annually is a very expensive venture, especially since we are always seeking to showcase the very best acts that are available," businessman Johnny Gourzong, a director of Summerfest Productions, told The Gleaner last year.

"We started realising a profit some years ago, and since then, we have managed to keep our heads above the water thanks to the continued support from our sponsors and the fans," added Gourzong.

It is not just the JTB and the promoters that have been counting their blessings over the years with regard to earnings from Reggae Sumfest. Guest houses, ground transportation, the craft sector, restaurants, and even unofficial tour guides have been beneficiaries.

"When it comes to Sumfest time, you can put on your pot because you know that food will be coming in," said craft vendor Byron Smith. "It is the one time of the year that the all-inclusive hotels can't lock away the visitors from us. This is the time that the regular taxi man and the street-side restaurants get their back-to-school money."

With the initial teething pains associated with securing stable sponsorship in the early years now history, and with contentious issues such as artistes being banned for homophobic lyrics now a distant memory, Sumfest is now fully entrenched in Jamaica's summer experience.

"Sumfest is an event that I look forward to every year. It is a classy event that is staged in safe surroundings, which means a lot to me," said Sandra Williams, a veteran fan of the festival. "This is where I saw my favourite artiste, BeyoncÈ, for the first time in the flesh."

In promising the JTB's continued support, JTB official Janice Allen, while speaking at the recent launch of the 2015 edition of the festival in Montego Bay, said it is a cultural event that promotes Jamaica in a positive light.

"The Jamaica Tourist Board is always supportive of this kind of event, which attracts a substantial audience and draws attention to our culture," said Allen. "It is an integral part of the Ministry of Tourism and Entertainment's '90 Days of Summer' promotion."