…. Of Caveman, FFPJ and a dream home 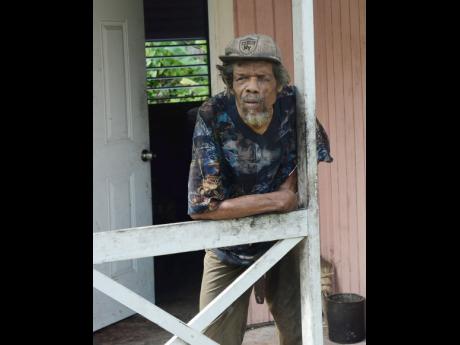 Mark Titus
Vivian 'Caveman' Smalling of St Vincent district, southern Trelawny, relaxing on the verandah of the house he got courtesy of Food For The Poor Jamaica.

After years of living in squalor in a dilapidated cave, Vivian 'Caveman' Smalling of St. Vincent district, southern Trelawny, was overjoyed in 2013 when he got news that he was to be one of the recipients of one of 102 houses which Food For The Poor Jamaica (FFPJ) was about to distribute to indigent persons in that part of the parish.

However, to the chagrin of Smalling and others like Paul Patmore, the independent councillor for the Lorimers division in the Trelawny Parish Council, when the houses were distributed, Smalling was bypassed.

Following investigations by Western Focus, it was discovered that, contrary to the FFPJ mandate, some of the houses earmarked for indigents like Smalling, were given to political activists, some of whom were already homeowners.

Following the publication of The Gleaner's story outlining the scandalous distribution of the houses, businessman Andrew Mahfood, chairman of Food For The Poor Jamaica, vowed to investigate the claims, promising to make the distribution system free from corruption.

Mahfood also made a solemn promise that no effort would be spared in ensuring that Smalling got the house promised to him.

Fast forward to 2015, Smalling is the proud owner of his own one-bedroom house, thanks to FFPJ delivering on its promise to him. His old life, living in squalor, is now behind him and, according to him, he is quite at home in his new surroundings.

"Mi happy! Mi still nuh believe say mi have mi own house," a smiling Smalling told Western Focus last week. "I have to say thanks to the Food For The Poor people."

A tour of Smalling's humble dwelling revealed he is fairly comfortable. His one-bedroom house features a bathroom, a living room and a verandah.

Whereas 65-year-old Smalling still has needs, especially in regards to food, his kind neighbours ensure he does not go

"I get my meals from a few members of the community,' said a relaxed-looking Smalling. "I have my own house and I am in good health. That is all I need. I have life."