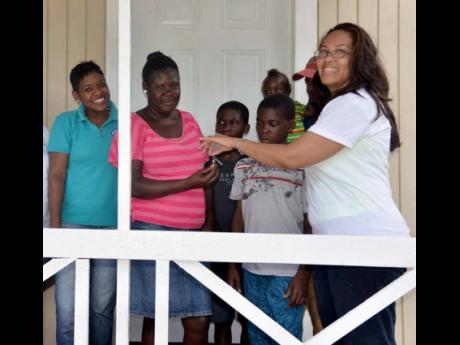 Mark Titus
Thirty-two-year-old Rebecca Edwards (2nd left), of Bounty Hall district, in Trelawny, collects the keys to her new home from Carolyn Chuck (right), of Courts Jamaica, one of the entities, which supported the effort of Food for the Poor Jamaica (FFPJ) to get her settled in a new home. Marsha Burrell (left), Development/Marketing Manager at FFPJ, and Edwards’ children look on.

When arsonists torched the Wakefield, Trelawny, home of Raphael Hibbert late last year, his family (seven adults and six children) was left in a state of despair. However, their gloom turned to joy within three weeks as Food For The Poor Jamaica (FFPJ) came to their assistance and built them a brand new home.

"I don't think I will ever have the words to say how grateful I am for what Food For The Poor did for me," Hibbert, a taxi operator, told Western Focus last week. "Without a roof over our heads, going into the Christmas season, I don't know how we would have managed."

Following the November 27, 2014 fire, which destroyed their home and belongings, the family was forced to stay in the homes of other residents, which was quite a challenge in terms of convenience. However, they had no choice but to endure the difficulties they sometimes encountered.

"We had to be sleeping in other residents' homes and we knew that, sooner than later, we would have to leave to give them back their privacy," said Hibbert. "We had no money to rebuild a house but, thank God, Food For The Poor came to our rescue."

The hands of kindness FFPJ extended to Hibbert's family is just one of many noble acts of kindness the organisation, founded in 1982, has shown to the residents of Trelawny in recent times to help alleviate those trapped in poverty, through transparent distribution of aid to them.

With communities such as Dumfries, Deeside, Wakefield and Bunkers Hill, formerly strong traditional sugar cane producers, now reeling from the scaling down of operations at Hampden Sugar Estate, resulting in significant job

losses, the timely intervention of FFPJ has been a blessing.

Similar to what the charitable organisation did for Hibbert's family, FFPJ has been reaching out to residents who become unemployed and, through partnership arrangements with churches, non-governmental and private-sector organisations, children's homes and service organisations, has established self-help projects in communities.

"Many persons knew nothing more than cutting cane, so when the factory scaled down its operation, many

could not get work anywhere else,"

said Evelyn Hall, a beneficiary of FFPJ's broiler-project initiative in her community. "Food For The Poor did a great thing to give us a start with the chickens."

Another notable project undertaken by the FFPH is the now-thriving J$2.5 million animal-husbandry project, which it established in partnership with the Bounty Hall New Testament Church. That project includes pig-rearing, beekeeping and cash-crop cultivation.

"We will be seeking to distribute piglets to interested individuals, in phases, with an understanding that, each beneficiary will return one of their produce to the project, creating a revolving system that can benefit generations to come," Dr Sonia Seivwright, former pastor of the Bounty Hall New Testament Church of God, told Western Focus at the time the project was launched.

While it has expanded into other areas of need, FFPJ remains committed to its primary mandate, to create housing solutions for the indigent and low-income families, through partnerships with agencies affiliated to the Ministry of Housing, Housing Agency of Jamaica (HAJ) and the National Housing Trust.

In 30 years since it has come to the fore, almost 30, 000 Jamaicans have benefited from numerous housing projects undertaken by FFPJ