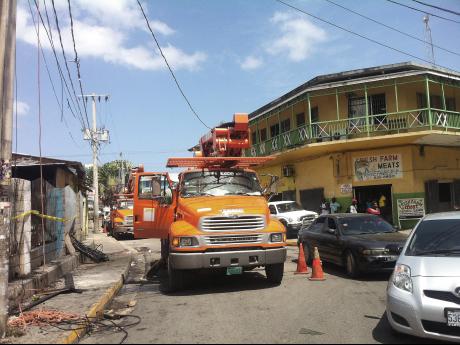 Adrian Frater
Several units from the JPS were busy removing illegal electricity connections from the Old Shoe Market in downtown Montego Bay in the aftermath of last week’s devastating fire, which resulted in more than J$75 million in losses.

Despite being an established landmark on the Montego Bay landscape for several years, it would appear that the Old Shoe Market, located on the corner of St James and Strand streets, is operating with the blessing of the St James Parish Council (PC).

In fact, Montego Bay's mayor, Councillor Glendon Harris, who is also the chairman of the St James PC, earlier this week rubbished claims that vendors at the facility were ever given approval by representatives of the council to set up shops or other operations inside the Old Shoe Market.

"I do not know of that, because, from I took office and it was said we should be collecting (revenue) from them, I said I will not be a part of that because it (the facility) is a risk in the city," said Harris. "It is a hazard, and the type of activities that go on there is not what we want. So I would not want to be a part of legitimising the illegality that goes on there."

The activities at the Old Shoe Market came to the fore last week when, firstly, the Jamaica Public Service (JPS) carried out a major campaign to remove illegal electricity connections and, secondly, a major fire destroyed 30 of the 200 wooden shops, resulting in more than J$75 million in losses to vendors.

Harris' declaration of the parish council's non-involvement with the Old Shoe Market contradicts claims the vendors made to Senior Superintendent of Police (SSP) Steve McGregor, the commanding officer for St James, during a recent police operation at the facility.

The vendors, who ply their wares in the facility, told McGregor that they were engaged by representatives from the parish council and their use of the facility was legitimate.

"The parish council is contending that they (vendors) have no legitimacy there, but in a meeting with them that I had, they were showing documentation that speaks to the parish council engaging with them and their efforts to make themselves legitimate and monies they have paid to different entities," SSP McGregor said. "They are saying that some people from the parish council are being accommodating while others are not, and that they have started paying money to some, and some say they should not."

According to Harris, the vendors were given temporary access to the site by Dr Horace Chang, the member of parliament for Northwest St James, in 2004, for vending during December. However, they never left and, 11 years later, it is now a source of much concern.

"The police have it as a hotspot. All kinds of activities are carried out there, and the argument is that they sell and rent guns inside there. It is a haven for prostitutes, persons that work in the nightclubs live in there, and babies are born in there," said Harris. "... so it has become a residence, a brothel, an apartment complex."

"Just on the periphery (of the premises), you have some vending, and hairdressing shops ... which cannot be in the middle of downtown like that," added Harris.

According to Harris, the council's original plan for the site was to construct a multistorey parking facility, which is much needed in the western city.

"The place should really be a multistorey park facility ... we want to develop a proper shopping facility, and above that, you would have the parking facility," said Harris. "It is still possible to clear the area, give them (vendors) notice, and deal with it, do the proper development of it ... it is all a part of the emerging business development plan."

While the Montego Bay Chamber of Commerce and Industry does not have a set position on the Old Shoe Market, chamber president Gloria Henry said it is a matter that is under discussion.

"At present, it is not something on which we have taken a position, so I would not want to say much about it at this time," said Henry. "However, it is on our agenda, so discussions, so we will definitely be looking at it."