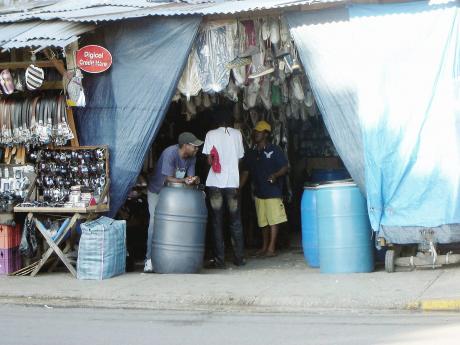 Christopher Thomas
The entrance to the Old Shoe Market in downtown Montego Bay.

When fire gutted a section of the Old Shoe Market in downtown Montego Bay early last Friday morning, destroying 30 of the 200 shops at the popular arcade, many lives were thrown into disarray as the affected vendors collectively suffered approximately J$75 million in losses.

"It is my life ... everything gone," said nail technician Maxine Smith as she stared at her burnt-out shop and what was left of items such as her hair dryers, oven and styling chairs and a refrigerator. "This is where the money come from to pay my rent and feed and for my children."

For persons like Kerold Clarke, the president of the Old Shoe Market Vendors' Association, Friday's fire was a classic case of dÈj‡ vu as, in the summer of 2008, on June 15, a similar early morning fire had gutted a section of the facility, destroying 15 shops with goods valued at more than J$30 million.

However, as was the case in 2008, like the Phoenix in Greek mythology, the Old Shoe Market, minus some of the affected vendors, was up and running within 48 hours of the fire.

While the Old Shoe Market continues to be seen as the premier location to go to when one is in search of high-quality merchandise, to include name brand shoes, clothes and other personal accessories, the absence of social amenities such as proper restrooms and regulated light and water has made it somewhat unattractive for business.

With rampant complaints of disorder at the facility over the years, the St James Parish Council announced a decade ago that the vendors would be relocated to the more convenient People's Arcade with a view to redeveloping the area for more commercially viable purposes.

In 2008, the Old Shoe Market began attracting much notoriety after Senior Superintendent of Police Steve McGregor, who was in his first stint as commanding officer for the St James division, described the facility as a place of ill repute which was offering an operational base for criminals.

"We have information that there is an ongoing extortion ring inside the shoes market by which certain individuals are demanding goods and money from vendors through intimidation," McGregor told The Gleaner at the time. "We have also got intelligence that guns and ammunition are being traded there, but we have not been able to substantiate this."

The situation at the facility took an ugly twist when, in January 2008, 38-year-old vendor Michael 'Scorcher' Nesbeth was shot and killed gangland-style inside the facility; and a month later, another vendor, 28-year-old Dion Williams, was killed in similar fashion.

While relative peace has returned to the Old Shoe Market, situations such as the recent fire have once again raised concerns about the appropriateness of having this densely populated wooden facility in the heart of the city's business district.

Only recently in his Western Focus column, the Western Watch Dog, former president of the Montego Bay Chamber of Commerce, businessman Davon Crump, called for the Old Shoe Market to be removed and the area converted into a taxi hub.

However, with some amount of uncertainty about the long-term future of the People's Arcade, which is sited on lands the Railway Corporation of Jamaica is seeking to reclaim, like the proverbial cat with nine lives, the Old Shoe Market seems poised to live on.