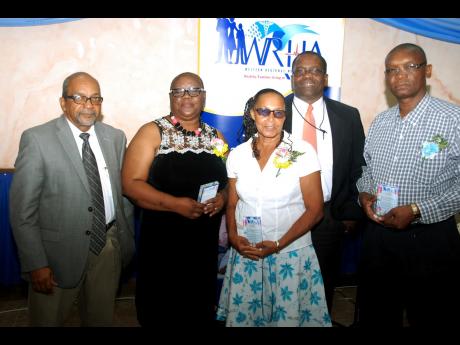 The Western Regional Health Authority (WRHA) said farewell to 36 staff members who collectively gave a grand total of 1,545 years and are now proceeding into retirement. The staffers served in various areas of the region's health services.

Speaking at a retirement luncheon at the Wexford Court Hotel in Montego Bay, Calvin G. Brown, the chairman of the WRHA, in lauding the contribution of the retirees to the region and the nation, quoted Sir Winston Churchill when he stated, "We make a living by what we get, we make a life by what we give."

"Working in the health service at whatever level does require a lot of giving, not only of one's talent, but of your time, and most importantly, your compassion," added Brown in praising the commitment and dedication of the group.

Among the retirees, five persons served for over 40 years. The range of service fell between 12 to 42 years.

In expressing the gratitude of the Ministry of Health, the board and management of the WRHA, Brown implored the retirees to become ambassadors of health as their support would always be welcome.

"Despite the criticisms of the health service, we can't do without it; it's a critical element of everyday living and Jamaica provides one of the best health services in the Region," said Brown. "... We will always have challenges, but with the blessing of Health Minister Dr Fenton Ferguson, we are facing them head-on, and I can publicly boast that we are making strides and making achievements."

Among the household names among the retires are; Community Health Aides Shirley Atkins-Deer and Lila Ricketts-Brown; Assistant Nurses Winsome Dobson-Campbell and Syra Lee-Melvin, who have given over 40 years of service each; and attendant Malcolm Wesley, who served 41 years; and Retired Regional Public Health Inspector Basel McFarlane, who served 42 years.

Former Chief Medical Officer and now Academic Dean at the All-American Institute of Medical Sciences in St Elizabeth, Dr Sheila Campbell Forrester, who once served the WRHA as regional director, described the retirees as "unsung heroes and heroines", while Dr Ken-Garfield Douglas, the WRHA regional director, said the service the retirees provided was "more than an achievement".

The retirees, who were presented with plaques, were also entertained by Sandra Senior of the now defunct performing duo, Us Two; and Digicel 'Rising Stars' contestant, Anna Kay Morris, who fittingly performed the Tina Turner classic, Simply the Best.