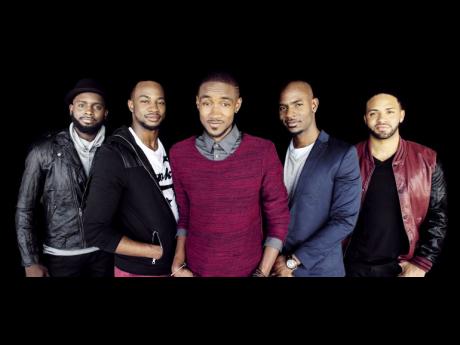 Contributed
The group Committed, which will be guest performers at the 2015 staging of Leharia Singers Ministry's annual gospel concert, Make a Joyful Noise.

The singing group Committed, which won Season Two of the NBC Sing-Off contest, has been booked as the headliner for the Leharia Singers Ministry's annual gospel concert Make a Joyful Noise, which will take place at the West Jamaica Seventh-day Adventist Conference Centre in Mt Salem, Montego Bay, on August 16.

Committed Ministry is an a cappella singing group, which comprises five educated young men who love creativity, music, and God. The group began in 2003 at Forest Lake Academy, in the United States and solidified its sound while at school at Oakwood University in Huntsville, Alabama.

Committed has grown to be a much-sought-after a cappella group for many events around the United States, and various other countries. These very talented young men are expected to keep the audience alive with their tight melodious harmony when they take the stage at Make a Joyful Noise.

"We are very excited about this year's event," said Jeanne-Marie Dillon Barrett, ministry coordinator of Leharia. "Committed is also very excited to be coming to Jamaica for the very first time."

The Leharia Singers Ministry consists of 14 Seventh-day Adventist youth, primarily from St James, but also has members from other neighbouring parishes.

"Joyful Noise is a charitable event that is geared towards raising funds for our educational scholarship programme that has been launched since 2013," said AndrÈ Bennett, Leharia director of the ministry. "Our concert is totally about worship, and we are expecting, this year to be even bigger, with singing sensation Kevin Downswell added to the line-up."

Other acts slated for the event include the renowned Kingston-based Kencot Youth Choir, Vivace, Audley Scott, Adoracion, and the host group Leharia, among other acts.

The much-anticipated concert is set to get on the way at 5 p.m. The cost for admission is $1,000 for regular tickets and $2,000 for limited VIP. Patrons may also purchase their tickets at the gate for $1,200.