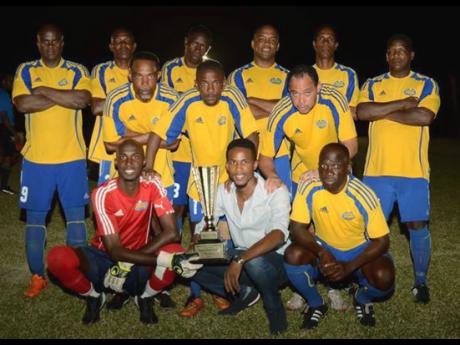 Constant Spring Masters crowned themselves champions of the inaugural Digicel Jamaica International Masters Football Tournament last Saturday when they defeated Jamaica Brazil 4-2 on penalties in the championship game at the Westpow Park in Montego Bay.

The formidable Jamaica Brazil, which featured the likes of Theodore 'Tappa' Whitmore and goalkeeper Warren Barrett, were odds-on favourites to walk away with the J$100,000 winners' purse, but with stalwart defender Durrant 'Totty' Brown playing a masterful game, Constant Spring were able to hold them at bay for a 0-0 regulation time scoreline.

After the dreaded penalty shoot-out, which saw Constant Spring missing only once in five attempts to Jamaica Brazil's two misses, they not only pocketed the prize money, but also became the first holder of the Macklin Peterkin Trophy, symbol of supremacy in the competition, which will be played annually in Montego Bay.

Their penalty shoot-out win in the final was Constant Spring's second shoot-out victory of the day. In their semi-final showdown against the visiting Lauderhill Lions from the United States, they booked their slot in the final with a 4-3 win. Regulation time ended with the teams locked at 1-1.

On their way to the final, Jamaica Brazil had to battle hard to overcome the dangerous Hanover Masters 2-0 to in a contest that brought the best out of the two teams, which are perennial rivals in the Western Master League.

"We are very pleased with the outcome of the tournament. All the teams did well, and seeing this was the inaugural tournament, I think it went very well," said former Jamaica Football Federation vice-president George Evans, the tournament's chief organiser.

"It was a most refreshing tournament. We anticipated that it would have been well supported and it was ... . Masters league football is very popular in this part of Jamaica," added Evans. "It was also very good that we had so many former national players involved."

In the presentation, which followed the finals, which was played under mobile floodlights, the main awards were as follows:

n Norman Foster (Jamaica Brazil) - The Player of the Tournament.