Duke of Earle gets key to Broward 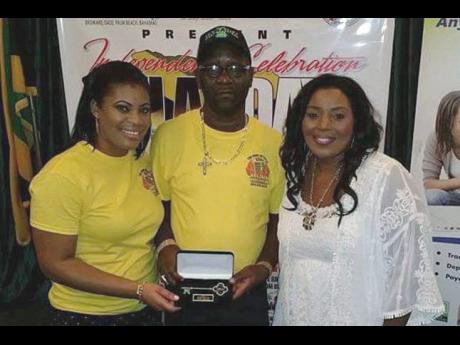 Contributed
Jamaican-born United States based radio personality Bevan 'Duke of Earle' Earle (centre) proudly displays the key to The County of Broward, in South Florida, which was accorded to him for his work in that community. Sharing in the moment is Earle's wife Jennelle (left) and family friend Barbara-Sharief

Last week, Bevan Earle, better known as The Duke of Earle, had very good reasons to feel proud. The St James native, who now resides in the United States, was presented with the key to the county of Broward in South Florida for his exemplary work in that community.

Earle, who is originally from Barrett Town in the parish, is a former policeman who also served in the Jamaica Defence Force. He was also quite popular in football circles in western Jamaica, being the founder of the Duke of Earle Football Club and, later, a staunch supporter of former national champions Wadadah FC.

Having settled in the US close to three decades ago, Earle is now a household name in south Florida on account of his hard-hitting talk show 'Hot Talk', which has been a staple on WAVS Radio 1170 for the past 26 years; and his newspaper, The Caribbean Voice, which is a much-sought-after publication among Caribbean people.

It was, therefore, no surprise to many when at the recent annual Jamaica Flag-Raising Day in South Florida, the sometimes-controversial broadcaster was recognised for his service to the company in broadcasting and social activism.

"It was really a proud moment for me," said Earle, who is also a recipient of the Jamaica Governor General Award. "It is always nice to know that your work is recognised by those around you."

"When I left Jamaica, I was determined to make something out of my life. I sent myself back to school because I quickly realised the importance of having a good education," continued Earle. "Thank God I did so because it is paying off for me today."

Earle, who plays a pivotal role in diaspora affairs in the US, continues to keep close contact with Jamaica, especially in Barrett Town, where he has significant investments.

"I am a proud Jamaican. I will never forget my roots," said Earle, who has been spearheading events such as back-to-school treats and assisting with sports in Barrett Town for several years. "I have found myself in a position where I can help others and it is my joy to do so. I love people. I have a passion for helping people."

Earle, who has had the privilege of rubbing shoulders with distinguished personalities such as former US First Lady Hillary Clinton and senators John McCain, John Edwards, and John Kerry, is also the recipient of an honorary doctorate from Cumberland University.