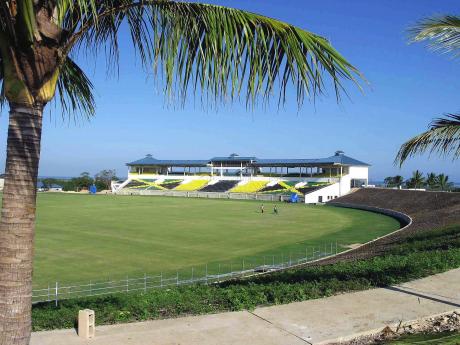 Contributed
The prestine Trelawny Mulit-purpose stadium, near Falmouth, in Trelawny.

Less than a decade after opening its doors with a mandate to bring high-quality sporting events to western Jamaica, the US$30 million Trelawny Multi-purpose Stadium appears to be well on the way to becoming the white elephant many critics had predicted it would have become.

With the glamour of hosting the opening ceremony for the 2007 ICC Cricket World Cup and several warm-up games prior to the tournament now a distant memory, except for operating as a western campus for the University of Technology (UTech) and hosting events such as the annual Jamaica Jazz and Blues Festival, the stadium is basically out of use.

"As it is, it's seems to be a white elephant as nothing is taking place there," said Linnel McLean, the long-serving president of the Trelawny Football Association. "Two seasons ago, we used it to host major league games, but because of its location, the games did not attract much spectator support."

While the stadium was created primarily as a cricket facility, McLean believes that with no cricket of note being played there at this time.

McLean, who is known to speak his mind, was quite forthright in declaring what he believes is to be blamed for the current stagnation at the stadium.

"It is a failure of leadership that has resulted in the non-use of the stadium, which is such an expensive investment," said McLean. "I believe it should be retrofitted and use for other sports to include football and track and field... it should not be left there to go to waste."

In 2010, UTech made a proposal to the Government, offering to invest J$250 million in developing the university's western campus on a property adjacent to the stadium on condition that they would be allowed to acquire the stadium, which they promised would be made available to host international sporting events.

"Based on our plans, sports would not suffer, but would be greater enhanced by way of better marketing of the facility," UTech's then president, Professor Errol Morrison, said at the time. "Our vision is to have sports and academics working together in a beneficial way."

However, after a protracted delay, the Government rejected the UTech proposal, much to the chagrin of opposition spokesman on finance, Audley Shaw, and several stakeholders in Trelawny, who want to see Falmouth transformed into a university town.

Subsequent to Government's rejection of the UTech proposal, Natalie Neita-Headley, the minister without portfolio in the Office of the Prime Minister, with responsibility for sports, said the stadium has to be developed as a part of the community for the use of the people, whether they reside locally or overseas.

Interestingly, while the Government was contemplating whether to accept or reject the UTech proposal, Richard Bourke, the President of the Trelawny Chamber of Commerce, made it clear that he was in support of the proposal, which he believes would have significant spin-off benefits for the parish.

"The spin-off for UTech being here is that the university will not only cater to students from Trelawny. It will also cater to students from outside of Trelawny, so again, the influx of persons utilising the facility will boost various sectors," Bourke told The Gleaner at the time. "More persons coming into the town would invariably boost commercial entities and housing construction for Trelawny.

While there are said to be several proposals on the table to utilise the stadium, including plans to establish a cricket academy as well as to offer it to sporting organisations in North America for training during the winter months, at present, it stands as a symbol of unfulfilled dreams and a burden on taxpayers.

Last year, Government announced that the facility was to receive approximately $49.1 million from the National Budget. A sum of $24.7 million was earmarked for operating expenses.

With UTech reportedly looking elsewhere with its development plans and the stadium generating very little income, there is now a general feeling that, with its recurring maintenance burden, if something is not done quickly to reverse the current situation, the stadium will turn out to be a very expensive white elephant.