Point land up for sale, but not to NHT contributors 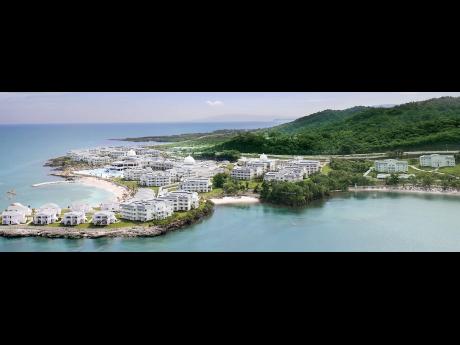 Contributed
An ariel shot of the Grand Palladium resort at Point, in Hanover, with the sprawling Point lans in the background

The more than 700 acres of land in Point Estate in Hanover, which is owned by the National Housing Trust (NHT) and was initially earmarked for housing development, is now up for sale, but not to NHT contributors.

Point Estate, as well as two other parcels of land in Green Island in the parish, was listed by JAMPRO as among the lands up for sale for investment in tourism projects, in the organisation's most recent, "Let's do Business" investment opportunities publication, issued several weeks ago.

"This property borders the famous Dolphin Cove attraction and is in close proximity to the Grand Palladium Resort," the JAMPRO document said. "The area consists 'of 729.3 acres of land located on both sides of the Point Leg of the North Coast highway.

A decade ago, the NHT promised it would be constructing more than 1000 housing units at Point Estate in the parish, but to date that has not materialised.

At the time of the promise, the trust's then Managing Director, Earl Samuels, said the agency would be moving with a sense of "urgency to tackle the housing needs in the parish. He said the NHT would add 7,500 new solutions to the parish's housing stock, including 2,800 units at Point Estate within four years, particularly in light of new hotel developments that was taking place.

But in 2008, Samuels, while addressing a Hanover Homecoming Investment Forum, said the construction of the Grand Palladium hotel at Point Estate, had pushed up the price of real estate in Lucea, and that the NHT had to "optimize land-usage".

Consequently, Samuels said, the NHT would reserve a section of the lands for "higher-end development" and use the revenue accrued to subsidize the other solutions, 60 percent of which would be town houses and detached units.

In February 2009, the then Minister of Housing, Dr. Horace Chang, said, among other things, that the Ministry of Housing was considering abandoning the Point development as the area was "easily subjected to landslides and drainage problems" due to its shale soil composition, which would easily fall apart if excavated and that the cost of the roads and the drains in particular, may take the cost of the house "beyond what most people can afford".

In its Performance Audit of the NHT, which was released earlier this year, the Auditor General's Department (AGD) criticised the NHT's lack of due diligence in the purchase of the Point lands.

The AGD said the NHT purchased 729.3 acres of land at Point Estate for $869.4 million; had sold 23.03 acres of the property to a tourism entity for $115.15 million and had not commenced any housing development on the remaining portion of land. It also said the NHT has spent $15.3 million up to December 31, 2014 on property management and did not conduct any physical inspection of the Point property to determine the existence of squatters prior to the execution of the sales agreement.