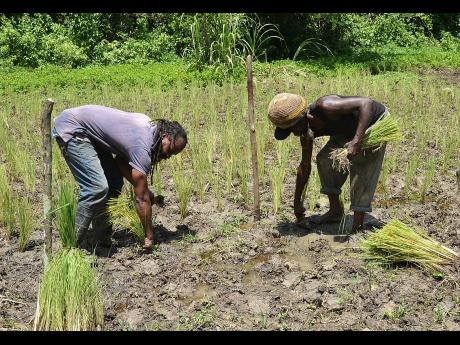 Ras Dawit (left) and his colleague, Bongo Danny, reaping the rice being cultivated by the Rastafari Sankofa Eco Warriors, which is based in the Cauldwell community in Hanover.

While the Ministry of Agriculture is seemingly still contemplating the viability of rice cultivation in Jamaica, a group has launched a project where they are cultivating organic rice in the marshes of Green Island, Hanover.

The strain of rice, which the farmers hope will be able to satisfy the national demand before long, is being cultivated by the Rastafari Sankofa Eco Warriors, which is based in the Cauldwell community and is spearheaded by Rastafarians Ras Dawit and his colleague Bongo Danny. The rice is being sold under the name, 'Rastafarice.'

"We have been cultivating rice on and off over the last two to three years," said Ras Dawit. "The name 'Rastafarice' came about because we are Rasta and we realise that Rastafari needs a product that is out there with its name for its people and at the same time we are doing it for Jamaicans overall. We do organic rice because we recognise that the future is organic and that GMOs (genetically modified foods) are not benefitting the people's health."

"We wanted to do everything green. And so, our rice is organic... we don't use any spray or fertiliser... and it is that natural brown old time rice that they call the 'coolie rice," noted Ras Dawit. "... it is a great rice, it tastes great, it has a lot of health values and it has so much potential, so many different products that can be made from it...the wine, the cake, the bread the flour, the organic rice milk also."

"With the rice business, you are not just reaping the rice and selling it. Because even when you mill the shell the outside is actually like wheat germ; it's also full of nutrients. In the US and those places that are smart, they use it as a vitamin additive," stated the Rastafarian farmer.

According to a 2009 Ministry of Agriculture brief on the Jamaica Rice Re-development Project, the country has a demand of 100,000 tonnes (220.4 million pounds) of rice annually, or just over 604,000 pounds per day, almost all of which is imported. The document said large commercial interests and small farmers were being targeted to drive an effort to replace 10 percent of imported rice with local production.

"The idea is for the establishment of small farmers' cooperative or a similar coordinated group effort which will see small farmers cultivating rice for sale to the domestic market. The government is committed to ensuring that suitable lands are available for this project," the document said.

However, in February this year, Agriculture Minister, Derrick Kellier announced that experts were now conducting an evaluation of the rice production programme to determine why it failed and whether rice cultivation was a viable option for the country.

But Ras Dawit says the fact that rice is a national staple, any foray into its cultivation would be viable and that the promotion of rice cultivation would alleviate the island's high unemployment problem. He said one of his group's future plans, was to assist by establishing "rice camps" to train persons in Hanover and other parishes.

"We also want to bring this into different zones of the island and create employment for our citizens. This project is on one acre of land. We plan to go to two acres next year, three acres the year after, or whenever it is possible. We are always advancing. And from this acreage we are looking to get about 2,000 pounds," said Ras Dawit. .