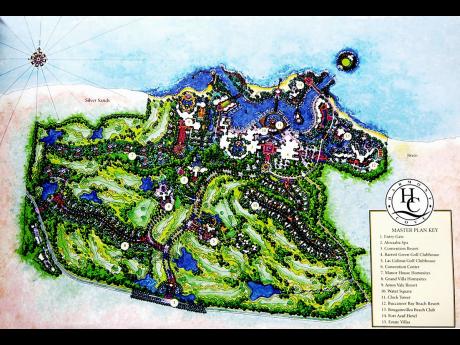 While it appears that exciting times are ahead for Falmouth, Trelawny, with the planned expansion of the Falmouth Cruise Ship Pier and news that the Harmony Cove Resort and Casino project is poised to come on stream, some stakeholders in the seaside town are nonetheless wary about the direct benefits that will come to residents.

"Such a project will certainly increase the value of our infrastructure, but a casino operation in the parish might only create job opportunities for a few persons," said businessman Ryan Keating. "It is what central government does with the taxes that are generated from the casino operations that will ultimately decide what benefits will come our way."

Harmony Cove Limited is the project vehicle for a mega casino resort, which is poised to be developed in Trelawny by the state-owned Harmonisation Limited and its private partner, Tavistock Group. The Government of Jamaica has a minority 49 per cent stake in Harmony Cove, which was initially conceptualised by the Development Bank of Jamaica and the National Housing Trust.

While the lands - approximately 2,300 acres, which have been earmarked for the development of the Harmony Cove project - were identified well over a decade ago, a number of factors, including lack of funds, have stalled the project for several years.

"Ninety per cent of the tourists that come to Jamaica do not get the opportunity to interact with the people because of the dominance of the all-inclusive concept," said Falmouth's mayor, Councillor Garth Wilkinson, in speaking to the limited benefits that come directly to tourism destinations like Falmouth, the hub of local cruise shipping.

However, with the economic partnership agreement (EPA) that is a built-in component of the plans for Harmony Cove, a hopeful Wilkinson, who is also chairman of the Trelawny Parish Council, is cautiously optimistic that direct benefits could accrue from the new venture.

"... I am of the view that with the EPA offering at Harmony Cove, things could change. I am quite hopeful, but we just have to wait and see," said Wilkinson, who has repeatedly voiced concerns about the limited benefits the town gets from cruise shipping.

Harmony Cove is one of two bidders seeking authorisation to develop casino resorts, which would require the company to build at least 1,000 hotel rooms in phase one and another 1,000 rooms in the second phase of the development.

While declaring a willingness to support all meaningful developments in Trelawny, environmentalist Hugh Dixon, head of the Southern Trelawny Environmental Agency, wants to see a second environmental impact study carried out before construction on the mega resort.

"I support any development in Trelawny, especially if it's sustainable," Dixon told Western Focus. "I have some interest but also some reservations in relation to the environmental impact. After almost a decade waiting for implementation, a second study would be ideal. What is paramount is sustainability and the environment."

Insofar as the expansion of the Falmouth Cruise Ship Pier is concerned, earlier this year, Professor Gordon Shirley, president of the Port Authority of Jamaica, said plans were being developed for the expansion of the pier, which was constructed at a cost of US$222 million just under five years ago.

Such an expansion would solidify Falmouth as the hub of cruise shipping in the Caribbean. However, based on past experiences in terms of spin-off benefits, the announcement has not stimulated much excitement among the residents of Falmouth.