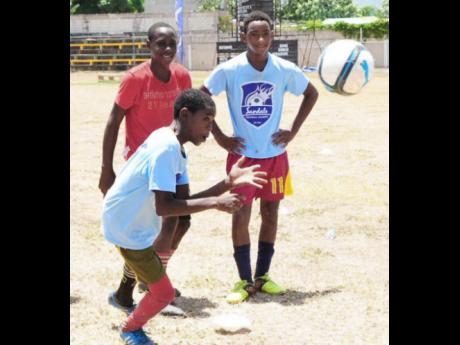 Paul Clarke
Campers at the Sandals Football Academy Summer Camp, which took place at Jarrett Park, in Montego Bay, doing one of the drills designed to help them master the technique of heading the ball properly. -

The 2015 staging of the annual Sandals Resorts International (SRI) Football Academy, which recently completed a six-week summer programme, has been attracting ringing endorsements from participants and officials alike.

"I enjoyed the programme because I have learnt a whole lot about football - how to make the right pass, and to play with respect," said Marc Graham, a 13-year-old Herbert Morrison Technical High School student. "l think this Sandals Football Academy will help us to be better players and also better people. The academy is a great opportunity for children like me to develop the right technical approach to football, and I am grateful to Sandals for that."

The programme, which began on July 11 and ended on August 21, saw youngsters, ranging in age from 10 -13 years old congregating at Jarrett Park in Montego Bay each Saturday morning to compete in a series of grass-roots level courses.

"The aim of this programme is to get as many talented youngsters - boys and girls - to introduce the game to them in the hope that they will master the basics at an early age," said Hopeton Gilchrist, the technical coordinator of the academy. "Programmes like these are never enough, and so Sandals saw it fit to be associated with the total development of our children through this football academy, which, clearly, is the building blocks on which stars are born."

This year, the Sandals Football Academy catered to 50 children who had a cadre of eight coaches and 12 coach educators putting them through the rudiments of the game. The campers were taught dribbling skills, the proper techniques of shooting the ball, proper heading techniques, and passing the ball.

"Each child is taken into account and taught the basics of the game such as passing, heading, shooting, and tackling in order to build their love and respect for football," said Gilchrist. "We also gave them lessons on the social graces to develop the best social practices, which they would take and practise at home and among friends at school."

While being elated that Sandals had taken a bold and important step in investing in youth development through football, Gilchrist said he wants other entities in the business sector to join in the process, noting that this is a way to assist in the overall growth of the nation's youth population.

"Not many businesses would get so involved, but I am urging others to do as Sandals has been doing to bring our youths to a place where they are appreciated and are given the tools to learn, not just football, but about life," stated Gilchrist.