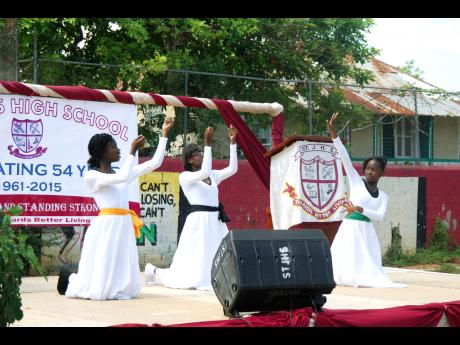 Student of St James High School showing off their performing skills during a colourful ceremony to mark the school’s 54th anniversary last week.

It was quite an interesting day at the St James High School in Montego Bay last Monday as the school, which started back in 1961 as Montego Bay Senior School, started the new school year by staging a colourful ceremony to mark its 54th anniversary.

The event, which was held under the theme '54 Years and Growing Strong,' saw students from the school's various clubs and societies, including the cadets, Red Cross, and the performing arts groups, showing off their creative skills and talents in many ways.

Members of the school's past students association (PSA), which has embraced the school and has been playing a pivotal role in promoting and projecting the institution, were also on hand to share in the experiences.

As a mark of respect to the students who did well in the last sitting of the Caribbean Examinations Council examinations, Radcliffe Green and Tavia Richards, who were the top male and top female students, were awarded by the PSA. Former top-flight entertainer and past student Sonny Ranking, who is now an

established businessman in Montego Bay, made the

"We believe there is a lot of value in this school, and as past students, we believe we have an obligation to help to motivate the students to set high standards and goals so that at the end of the day, they will become worthwhile and;

productive citizens," Dennis 'Mackie Conscious' McKay, another of the outstanding musicians/entertainers the school has produced. In a brief address to the school, vice-chairman of the school board the Reverend Conrad Pitkin urged the students to make the most of their years at the

institute, whether they were new or returning students.

"I want to congratulate the institution for celebrating 54 years of existence and for offering quality education to western Jamaica," said Pitkin. "What you do with the years you spend here is important and will determine your future. You need to realise that for you, the sky is the limit. You can be a success if you are determined to do that."

Cecelia Jackson of the Ministry of Education's Region Four also lauded the school for reaching the enviable 54-year milestone.

"Anniversaries are generally known for providing opportunities for reflection, evaluations, and projections," said Jackson. "Fifty-four years for any institution to be in existence is a long time by any stretch of the imagination. This is certainly an admirable achievement worthy of commendation and congratulation. This is a testimony to your progress as a result of the hard work and dedication of generations of school administrations and staff supported by stakeholders."