‘Scammers’ could become BPO rock stars - *... their sophistication and ‘gift of gab’ an assets* 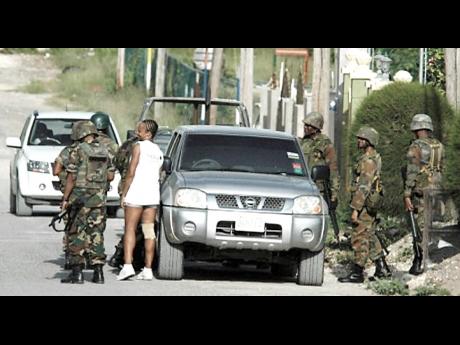 Contributed
Members of the security forces conversing with a resident while carring of a lottery scam raid in a Montego Bay, community

As the horrifying murders, which are being blamed on the illicit lottery scam, continue to rock several communities in western Jamaica, one of the region's prominent business leaders is expressing the view that should they choose to adopt a legitimate lifestyle, some of the scammers could become rock stars in the business process outsourcing (BPO) sector.

"The reality of it is that I have seen where these lotto scammers are so talented the work (illicit activities) that they do - if they channel that energy into coming and getting a job in the call centre in the BPO sector, they will be 'rock stars," said Davon Crump, the CEO of Global Outsourcing Solutions.

"They would make it. That is why I would say to them, 'Put your talent elsewhere. Good money can be made in the call centres.' The reality of it is there are legitimate jobs for these people in the BPO sector," continued Crump, who is a former president of the Montego Bay Chamber of Commerce and Industry (MBCCI). "Their skills could serve the sector well in a legitimate way."

It is widely believed that the scammers, many of whom are high school graduates, are masters of new technology and that coupled with their sophistication and gift of gab, would make them good candidates for a successful career in the BPO sector, which requires those skills.

While stakeholders in national security have been giving the general impression that lottery scamming is on the decline, the straight-talking Crump told a recent Gleaner Editors' Forum that based on information to which he is privy, scamming is still quite prevalent, albeit less obvious.

"I used to be of the belief that it (lotto scam) is on the decline, but it is very much there. It is still there. It is prevalent. They (the scammers) just move their operations all over the place through technology," said Crump. "Nowadays, they are in St Elizabeth, they are in Mandeville. They might not be here in Montego Bay as much, but they are just as much doing what they have been doing."

According to the police, because of their cash-rich status, the scammers, who the US authorities say have bilked unsuspecting American citizens out of more than US$300 million since 2006, are able to buy illegal guns and ammunition and finance criminal gangs.

In fact, the police believe that the lottery scam is at the heart of the spate of gruesome murders that has been plaguing the parishes of St James, Hanover, and Westmoreland in recent months, making them the nation's most murderous police divisions.

Like the police and the other affected stakeholders across the western region, the Montego Bay business community, through the MBCCI, has been making a bold attempt to get young people to reject illicit activities such as scamming and embrace legitimate endeavours such as the jobs on offer in the BPO sector.

"The chamber is working to see how best we can have a shift in the minds of the young people so we can get them engaged in meaningful activities and get them to move away from lottery scamming," Joy Clarke, a director of the MBCCI and a top Digicel official in western Jamaica, told a recent Gleaner Editors' Forum.

While praising the recent legislative changes, which have resulted in new laws to target and bring scammers to justice, the MBCCI believes the effort of law-enforcement would bear much more fruit if the local mindset that scamming is good, which is quite prevalent, especially among the relatives and friends of scammers, did not exist.