Shaunavon sparkling in US college football 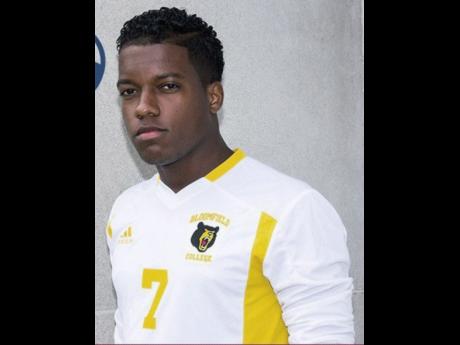 Now in his third year at Bloomfield Junior College in New Jersey in the United States, former Munro College daCosta Cup star striker Shaunavon DeSouza is now creating waves in the 2015 Central Atlantic Collegiate College (CACC) Men's Soccer Championship, and from all indications, he is poised for a fantastic season.

Last week, the lanky 22-year-old native of Montego Bay, St James, was voted the CACC 'Player of the Week' after scoring three goals in two games. The award made him the first player from Broomfield College to have taken home the coveted award since 2011.

"This is great news! He is quite passionate about his football, so it is really pleasing to me to see him doing so well," said businesswoman Hopal Vassell, young DeSouza's football-loving mother. "I have been watching his progress over the years, and I am really happy for him."

DeSouza, who was captain of the Munro College daCosta Cup in his last season at that institution, was a member of the impressive Jamaica All-School team, which toured Florida at the end of the 2012 local schoolboy football season.

"Shaunavon has stepped up his game this season, and it's great to see him get this recognition from the CACC," said Peter John Falloon, the coach of the Broomfield College team. "It is still early in the season, and there is room for improvement. If he continues to work hard he, will make himself and his teammates better."

The fact that Shaunavon is doing so well should be no surprise to the persons who know his family background in football and who have been following his progress since his early days, representing Montego Bay Preparatory School in the St James Victoria Mutual Building Society Under-12 Football Competition.

His father, Shaunavon DeSouza Sr, was a star striker on the daCosta Cup circuit in the 1980s, representing William Knibb High School for five consecutive years. After high school, the older DeSouza, who was renowned for powerful shots on goal, went on to represent Seba United in the Red Stripe NPL Football Competition for several years.

On his mother's side of the family, his older cousins, Gary and Andrew Vassell, were both standout players at the schoolboy level, where they represented Cornwall College; and at the senior level, where they played at both Seba United and Violet Kickers.

In his 'Player of the Week' performance, Shaunavon scored twice in his team's 4-3 loss to the high-riding Wilmington College and once in his team's 2-0 win over the Golden Lions of Dowling. During the two games, Desouza, who is now the tournament's leading goal-scorer, took seven shots and all were on target.