Expo to target students * - ….. creating a bridge to employment* 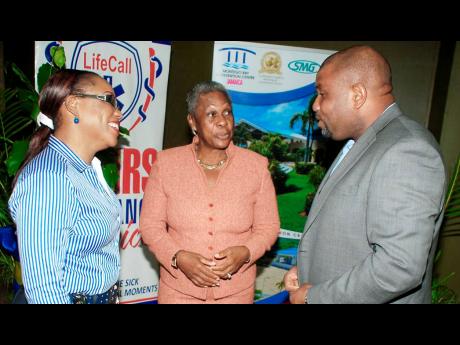 Cognisant of the view that the future belongs to the youth and also fully aware that the business process outsourcing (BPO) sector could play an important role in that future, special emphasis will be placed on offering employment options to students during the 2015 staging of Montego Bay Expo, which will unfold this weekend.

"We want the next generation to be more creative - to bridge the gap between going to school, learning a skill, and developing their talent," said Gloria Henry, the president of the Montego Bay Chamber of Commerce and Industry (MBCCI), which is staging the event.

The avenue through which the MBCCI has chosen to catch the attention of the students is a job fair, which is slated to be an integral part of the three-day event. It is primarily aimed at tertiary-level and high-school students who might be open to pursuing a career in the business process outsourcing sector.

"We are bringing out the students, but we are not just bringing them out to look at the exhibits," said Henry, who is keen on getting the students to buy into the opportunities that will be on offer.

" We are saying to them, here is the potential for your employment in the BPO industry."

Within recent times, some prominent players in the BPO sector have being expressing the view that based on the rapid rate at which the sector is growing, they believe it has the potential to surge past tourism as the premier source of generating earnings for the local economy.

"Over the last three years, we have seen the upsurge of the BPO sector. It should be noted that the BPO sector is a mass-employment sector that has the potential to far surpass the employment opportunities in tourism," Davon Crump, the CEO of Global Outsourcing Solutions Limited, a call-centre operation in the Montego Bay Free Zone, stated in a recent interview with The Gleaner.

In looking at the exciting possibilities the job fair could open up to the students and other prospective players in the BPO industry, Henry said that the MBCCI would be partnering with the Business Processing Industry Association of Jamaica (BPIAJ) in the hope of generating maximum impact.

"We are working on building a career hub at the expo this year," stated Henry, who is also the assistant vice-president of operations at the Port Authority of Jamaica (PAJ). "That career hub is going to equip, empower, and engage,

According to Henry, the plan is to bring out all the fifth-form students from the high schools along with students from tertiary institutions. They will be encouraged to interface with officials from organsations such as the Caribbean Maritime Institute, which could point them towards rewarding career opportunities.

According to expo chairman Sonia Clarke Bowen, the 2015 Montego Bay Expo, which is being staged under the theme 'Inspire, Create, Next Generation,' is designed to 'conjure up images and ideas relating to technology, speed, youthfulness, energy, and the future.

Another area the organisers are hoping will appeal to the students is the new-look textile industry, which is steadily moving away from traditional lines and venturing into value-added, using improved technology, which is being driven through the BPO sector and other entities.

"With the input costs coming down with lower energy costs and our fiscal growth target moving in the right direction, there is now a new opportunity to focus on manufacturing," said Henry.