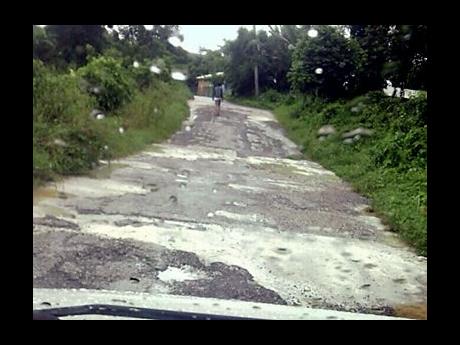 The political representatives, who will be vying to represent the residents of the Blue Hole district in Montpelier, St James, could face a tough task convincing them to vote, as angered by the poor state of the infrastructure in their community, they are threatening to boycott the elections.

According the people, who poured out their concerns to The Gleaner, despite the consistent appeals, they have been making to their political representatives, nothing has been done to uplift the state of the community and improve the quality of the lives of residents.

"Please, we can't take it anymore in Blue Hole!" one disgruntled female resident shouted out to Western Focus team. "There is nowhere to walk or drive. We are suffering!"

For many years, the residents have been begging for rehabilitation work to be done on a number of roads in the area, particularly the main road, which badly needs attention, having been in a deplorable state since 2007.

According to the residents, taxi operators refused to venture into the community for fear of their vehicles getting damaged as well as being preyed upon by criminals when they slow down to negotiate the many potholes.

Interestingly, the community's main road serves as a bypass from Westmoreland to St James and back when the regular route, the Long Hill main road, is blocked. Poor lighting is also another longstanding issue of concern.

"A lot of working class people live in this community and we are not given the help or respect we deserve," said a businessman, who asked not to be identified. "We are calling on the member of parliament, agriculture minister Derrick Kellier, to come and address the problem because, since he won in the last election, we have not seen him back in Blue Hole."

The businessman said he was also quite unhappy with the councillor, Homer Davis, the man who represents the community in the St James Parish Council. According to him, the councillor has been quite neglectful.

When contacted, councillor Davis told Western Focus that he is fully aware of the deplorable state of the roads in Blue Hole. However, he noted that plans to get the road fix has long been in motion, but the funds have not been forthcoming.

"I did what was required of me," said Davis, who estimated the cost for the road repairs at between J$75 and J$80 million. "I informed the superintendent at the St James Parish Council. They did the estimate. Bring it to the parish council. We move the motion for it to be sent to the Ministry of Local Government for the necessary funding to be made available. So beyond that we can't do anything more. We just have to wait."