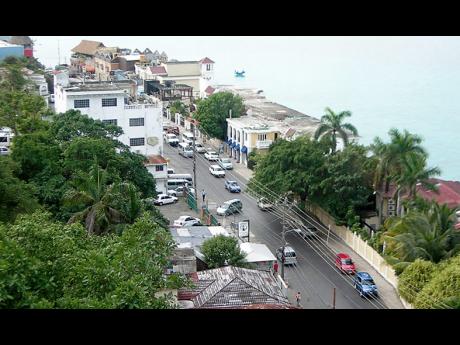 Paul Williams
An aerial view of the Montego Bay 'Hip Strip' showing a blend of hoels, restaurants, entertainment venue and the Caribbean sea in the background.

businesswoman Gloria Henry, president, of the Montego Bay Chamber of Commerce and Industry (MBCCI), wants the Montego Bay Hip Strip to be designated a European Plan (EP) hotel-only zone. However veteran hotelier Godfrey Dyer ihas declared a resounding 'no' to such a proposal

Henry believes it would give the hip strip a bounce, in terms of revitalisation, Dyer, however, thinks it would interfere with free enterprise, which would limit investors in terms of what they can do.

"I do not support such a call from the president, the Government could not make such legislative changes, because they would be interfering with free enterprise. The investor should be allowed to choose what he wants to offer," said Dyer, a respected voice in tourism circles.

According to Dyer, the reason why the hip strip is not as vibrant as it used to be is a number of hotels have closed their doors in recent times, resulting in a decrease in the number of visitors spending time on the scenic strip.

"The main reason for the decline is the number of hotels that have been closed and, until we are able to get these hotels reopened, the business will not improve," said Dyer, former president of the Montego Bay Chamber of Commerce and Industry (MBCCI). "

"But, to this, the government will need to step in and offer some special incentives to the hotels along the strip to operate as EP hotels, because, if they are reopened as all-inclusive, they are not going to help the strip, and the community benefits a lot more from EP hotels than it does from all-inclusive."

A European-Plan hotel rate does not include meals or beverages, which leaves guests with no other choice but to go off-property to patronise restaurants and sports bars in various communities.

On the other hand, guests at all-inclusive hotels are tied to a package deal, which includes accommodation, meals, beverages, even entertainment, which, at times, rival that which is offered off property. As a consequence, their guests have limited incentives to leave those hotels.

In advancing her position for the Hip Strip to be designated an (EP) hotel, only zone, Henry told a recent Gleaner Editor's Forum in Montego Bay that it would create the type of 'trickle down' effect, which would see greater benefits coming to the Montego Bay community.

"We believe that Government should make it a policy that the strip is operated as EP only because, we believe, if they do that, it will help to drive vibrancy, growth and robustness in a different kind of tourist that will come to support the economic base of Montego Bay and the western region," said Henry.

"If the Government makes it a policy, it will push the other hotels along that strip to find owners and operators and help drive a renewed interest in this offering."

Once considered the hub of business and entertainment in Montego Bay, the 'Hip Strip,' is today a mere shadow of former years when it was seen as the 'hippest and trendiest strip in the Caribbean'. This is mainly as a result of the closure of hotels such as Breezes Montego Bay, the once-popular Gloucestershire Hotel and the Casa Blanca Hotel - approximately 1,100 rooms.