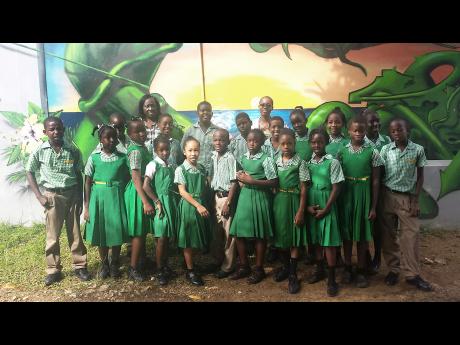 An extra push and an innovative approach was what propelled the Pell River Primary School, in Hanover, to gain its first-ever 100 per cent score in the Grade Four Literacy Test this year, a feat that also enabled them to top their school zone.

"We pulled out the small ones in the afternoon and each teacher would take like three every evening and help them in their slow areas ... every teacher was involved - every single one," said Opal DeLisser, the acting principal of the school. "The grade-four teacher pulled out the ones who really needed help. She kept the ones who can manage, and those who cannot manage, she divided them up among the other five teachers and the principal.

"We concentrated on the boys because they were the slower ones," said Delisser. "We watched DVDs that they brought from home and we would watch them together. We used toy cars and everything that the boys are interested in. We played football with them, then we would come inside and have them write about it. We had them use words that they use in football all the time."

"On Saturdays we were here. We played, we talked and we wrote. Even though they are boys, we also played netball and wrote a story on netball," added Delisser.

The intervention enabled the school to move from an 85.7 pass rate last year to 100 per cent this year. Alicia Heron, who was grade four teacher up to the end of June this year, told The Western Focus that one of her other strategies was to give extra work to boys in her class, who were under performing.

"I called their parents and they came and sit and we talked. One boy, I sent extra homework with him, some extra words for him to learn. I took pictures of it so he had to learn them at home and when he came to school, I took out my phone and look at the words ... he had to call them and spell them and things like that," said Heron.

Heron said she had high expectations of the batch of her 21 former students, who have now moved on to the fifth grade.

"If they continue on that trend, they will do well in the GSAT. They are highly motivated," added Heron.