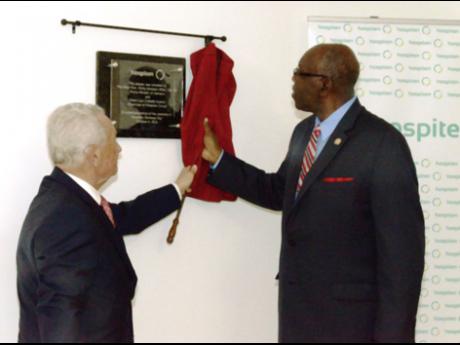 As local stakeholders continue to seek innovative ways to improve the island's tourism offering, a giant step was made recently with the opening of the new multibillion-dollar state-of-the-art Hospiten Montego Bay medical facility, which appears to be tailor-made for health tourism.

The world-class $2.3 billion facility, which is located closeto Rose Hall's scenic Cinnamon Hill Golf Course - one of the standout attractions along the city's elegant corridors has the enviable distinction of being the only private hospital in rural Jamaica with an intensive care unit (ICU).

"It is a giant step in terms of heath tourism," said Tourism Minister Wykeham McNeil, who was present at the grand opening of the full-service facility, which features an image diagnostics centre, a surgical-block, a clinical analysis laboratory, a 24-hour emergency room, and 22 hospitalisation rooms.

"We have had a lot of discussion over the years about health tourism, and there have been small incursions, but here, we have a US$20 million investment in health tourism, which will benefit Jamaicans and visitors alike," said Dr McNeil.

Dr Pedro Luis Cobiella, who is chairman of Hospiten, which has its foundation in Spain, says the Hospiten Group, which is an international network of private hospitals, is fully committed to providing high level health-care services in Jamaica. He also spoke to its health-tourism potential.

"Tourism and Hospiten have walked hand in hand for many years. As Jamaica grows as a quality tourist destination, Hospiten will work towards covering the health-care needs of this beautiful island," said r Cobiella. "It would not have been possible to build this hospital without the energy and vision of all the persons who have worked for and developed the project."

Even ahead of opening its door, the new medical facility was already having a positive impact on the economy of the western city, providing construction jobs to numerous skill workers. Now that it has been completed, it is expected to offer over 300 jobs.

Like the tourism minister, Evelyn Smith, the Jamaica Hotel and Tourist Association (JHTA) boss, is quite excited about the new facility, which is equipped with a CT scanner, mammography equipment, x-ray, and ultrasound machines

"It's a great investment in tourism and it answers the call for a service that is so needed within the industry right now, so obviously, the membership welcomes it," said Smith.

While its tourism potential is obviously its greatest appeal, locals, some of whom are not prepared to deal with the frustration associated with health care in the public hospitals, could well see this facility as a saving grace - an alternative to jetting off to Miami.

The new facility will complement existing private hospitals such as the Montego Bay Hospital and Urology Centre and the Doctors Hospital in Montego Bay; and the Royal Medical Centre in Savanna-la-Mar, Westmoreland, the more renowned private health facilities in western Jamaica.

The new hospital could also go a long way in reigniting the desire of stakeholders in Negril, to establish a medical centre in that town.

At present, the closest health facilities to Negril are the Noel Holmes Hospital in Lucea, Hanover; and the Savanna-la-mar Public General Hospital, in Westmoreland, which are somewhat limited in scope, causing them to transferr major cases to the Cornwall Regional Hospital in Montego Bay, which also has its own challenges.