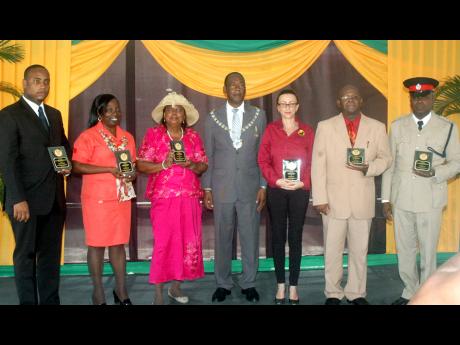 The spotlight shone brightly on seven illustrious citizens of St James last Monday as they were all presented with the coveted Sam Sharpe Award as a part of the parish's 2015 National Heroes Day celebrations.

The other awardees were as follows: Renown Police inspector Peter Salkey, humanitarian Tamsyn Browne, who has made a career out of caring for animals; educator Errol Clarke, who served education for over 40 years; attorney at law Henry McCurdy, the CEO of Last Resort Detective Agency; nurse Olga Marston, an extraordinary midwife for over 40 years; and Judith Wallace, a stalwart in volunteerism for nearly two decades.

In his official welcome, Montego Bay's mayor, Councillor Glendon Harris, spoke of the virtues of giving service to one's community, noting that dedicated service is a critical component in nation-building.

In congratulating the awardees, whose respective citations spoke glowingly of their contribution to the parish's development, the mayor projected them as persons who other citizens should seek to emulate.

One of the major highlights of the ceremony was the laying of floral tribute in honour of Jamaica's seven national heroes. The floral tributes were laid by seven high school principals from across the parish.

The floral tributes were laid as follows: