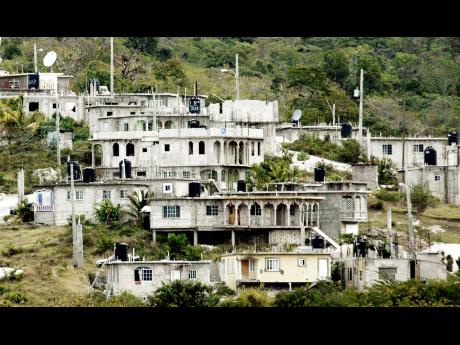 Adrian Frater
This file photograph captures a section of unplanned development, which has been a feature of the North West St. James constituency.

Despite the many positive signs indicating that Montego Bay is now ready to embrace real growth, there are still some lingering concerns, which if not addressed, could derail the transformation plans.

In a recent column, which was published in The Gleaner's Western Focus, businessman Davon Crump, the CEO of the business process outsourcing (BPO) entity, Global Outsourcing Solution, expressed much frustration at the unkempt state of downtown Montego Bay, which was hurting the city's pristine reputation as the nation's tourism capital.

"I'm not enough of a creative writer to paint the true picture of what is happening in downtown Montego Bay," wrote Crump, who is a former president of the Montego Bay chamber of Commerce (MBCCI). "(but) Believe me, the reality is a thousand times worse. Some business people continue to dispose of their garbage on the streets; the citizens dump their garbage in the drains, while the authorities are fiddling around. This once beloved city has been abandoned to filth, depression, and squalor."

In addition, the challenges posed by the city's 22 unplanned (squatter) settlements, which many see as the breeding ground for crime; is another source of much concern, if not embarrassment, as it is clearly an impediment to the ongoing bid to attain good social order.

"Unless you get (these) people living in a more humane and civilised environment, you are not going to be able to fight crime. Crime thrives in chaos," said prominent businessman Mark Kerr-Jarrett, who is a noted land-developer in St James. " ... illegal tenancy is enforced by illegal means, which keeps the community in such chaos that not even the police want to go there,"

The overall crime problem in the city, which has been averaging over 100 murders every year since 2006, is perhaps the most intimidating of all the social ills plaguing the city. In fact, there is a general acceptance by legitimate stakeholders that, legitimate investments cannot flourish alongside crime, especially the illicit lottery scam.

"It (crime) is difficult because as long as parents and close friends feel it is the only way they can have some money in their pockets, they are going to favour it," said highly-respected hotelier Godfrey Dyer, while speaking at a recent Gleaner Editor's Forum. "Until more jobs are provided, until we are able to reduce youth unemployment, we are going to have these unfortunate problems.

However, with entities such as the Montego Bay Chamber of Commerce and Industry (MBCCI) and the Business Processing Industry Association of Jamaica (BPIAJ) now taking steps to steer more and more tertiary and high school students towards career opportunities in the BPO sector, many stakeholders are hopeful that the sector may soon replace crime as the preferred option for income generation.