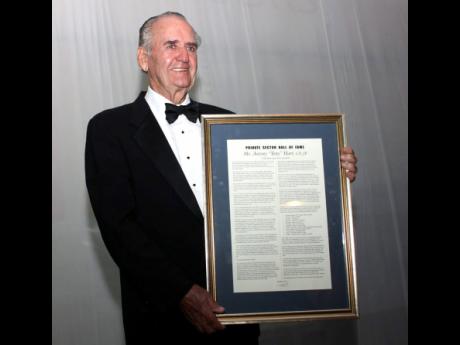 Businessman Anthony Tony Hart, who was inducted into the Private Sector Organization of Jamaica (PSOJ) Hall of Fame in 2013, is among the five persons who will be inducted into the Montego Bay Chamber of Commerce and Industrys (MBCCI) Wall of Fame.

Five outstanding pioneers, who have created industries that have helped to shape Montego Bay's economic landscape, have been selected to become the first inductees of the newly created Montego Bay Chamber of Commerce and Industry (MBCCI) Wall of Fame for esteemed business leaders.

At a recent MBCCI meeting, chamber president Gloria Henry announced the formation of the wall of fame and the names of five esteemed business leaders who have been selected to become the first inductees.

"These honorees would have demonstrated a high standard of ethics and selfless contribution," said Henry. "That vision and innovative thinking can help shape the development of a community and build a platform upon which future generations can be inspired."

According to Henry, the MBBCI Business Leaders Wall of Fame is dedicated to creating an awareness and appreciation of the rich heritage of exemplary business leadership.

While the MBCCI has decided to go with five inductees for the inaugural induction into the wall of fame, Henry said that going forward, only one business leader would be up for induction each year.

The five inductees will be officially ratified during the MBCCI banquet, which is scheduled for Saturday, November 14, at the Hilton Hotel, in Rose Hall, Montego Bay.

Following the induction ceremony, the wall will be erected at the chamber's headquarters at Overton Plaza in Montego Bay. The MBCCI will be inviting members of the public to visit and gain insight into the inductees, whose contribution she said has the potential to inspire others

Henry also stated that the chamber would be trying to get a display mounted at the Montego Bay Cultural Centre along with establishing a presence online.

"We want to issue a challenge to the younger generations. Study the lives of these successful business leaders to expand the scale, scope and size of their vision," said Henry.