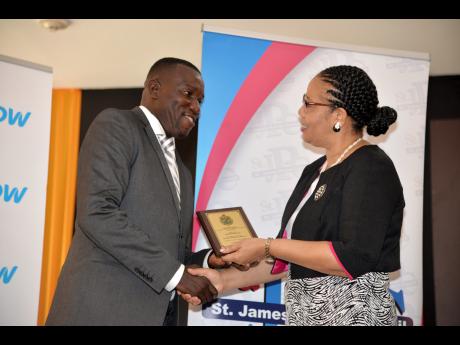 In speaking to some of the issues that he believes should be urgently addressed to make Montego Bay a better city, the mayor said matters such as the divide created by 'class' and 'politics' were standing in the way of progress.

"I met with some Kiwanians this morning, and after having some discussions with them, we decided that we are going to pull all the service clubs together," continued Harris. "For too long, service clubs have been going in separate ways, accomplishing less than they would if they had joined in a unified effort.

"If they (the service club)

collaborated, then they could have got to a much wider extent, and that is a lesson to me and all of us - that we need much more collaboration so that we can really reach the highest level," added Harris.

In the first-of-its-kind ceremony, which was organised as part of the 35th anniversary celebrations of Montego Bay attaining city status, 35 individuals and businesses that have made significant contributions to the growth of the city were presented with the St James Parish Council's Trailblazers Award.

Guest speaker at the function Patrick Prendergast, the acting director of UWI Mona Western Jamaica Campus, praised the idea of the Trailblazer Awards, saying it is just reward for those who, through dedication, determination, and intent, had emerged as trailblazers.

"It is the insurmountable and deep-rooted passion - which they have for something, for their community, parish, and family - that propels them to carve pathways to the development of the city," said Prendergast.