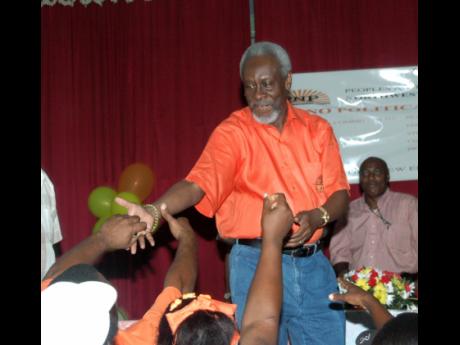 Adrian Frater
Former Prime Minister P.J. Patterson being greeted on his arrival for a PNP workers’ meeting at the Montego Bay High School, St James, in 2007.

In the 2011 general election, which the ruling People's National Party (PNP) won by a comfortable 42 to 21 margin, western Jamaica played a pivotal role in that success as 12 of the region's 16 parliamentary seats went to the Portia Simpson Miller-led party.

In 2007, the situation was similar in the west as while the Bruce Golding-led Jamaica Labour Party (JLP) won the national election 32-28, the PNP was victorious in the west, taking the region by a close but decisive 8-7 margin.

On a parish-by-parish basis, Westmoreland has been voting solidly for the PNP over the past two decades. In fact, except for 1980 when the JLP registered a whopping 51-9 win to form the government; and in 1983, when the PNP boycotted a snap election called by then Prime Minister Edward Seaga, the PNP has consistently been sweeping Westmoreland by 3-0 margins.

Before 1980, St James was also considered PNP country; however, that has since changed as within recent years, both parties have been taking turns in the ascendancy. In 2002 and 2007, the JLP secured back-to-back 3-1 wins, only to see the PNP recapturing the parish in 2011, winning three of the five seats, including the newly created Central St James constituency.

The PNP's loss of St James in the 2002 general election was a bitter pill to swallow for former Prime Minister P.J. Patterson, whose government had invested significantly in infrastructural development in the parish.

"When I look back and remember what I did as prime minister for St James between 1992 and 2002 and what St James did to me, I will never forget, never forget," said Patterson, while addressing party workers in the parish in 2007.

In Hanover, the western section has been solid PNP territory, while the eastern side has been shared by both parties. In 2002, the JLP won the seat easily. However, in 2007, with political heavyweight Dr D.K. Duncan in the ring for the PNP, he snatched victory, albeit by a mere 10 votes. Duncan again won in 2011.

Since 2002, the JLP and the PNP have been sharing the spoils in Trelawny with the north voting PNP and the south voting JLP.

In the 2011 general election, the JLP blocked the PNP's bid to recapture the south, which was in that party's column during the 1970s; as incumbent Member of Parliament Marisa Dalrymple-Philbert registered an emphatic 6,260-4,735 win over her PNP opponent.

In St Elizabeth, the fortunes have constantly been fluctuating. In 2002, the PNP easily won the parish by a 3-1 margin; however, in 2007, the JLP took control, snaring a 3-1 win as J.C. Hutchinson, Dr Christopher Tufton, and Franklin Witter all emerged victorious. Only Kern Spencer managed to save face for the PNP.

However, in 2011, with new faces in Hugh Buchanan, Raymond Pryce, and Richard Parchment, the PNP reclaimed St Elizabeth, again by a 3-1 margin as the JLP fumbled. Tufton, who many viewed as a future JLP leader, was among the casualties for the Labourites, losing his seat by 13 votes.

With the next general election now looming on the horizon, the west is again in the crosshairs as the two parties take aim at 16 parliamentary seats.