Zooming in on the west - PNP, JLP target 16 parliamentary seats 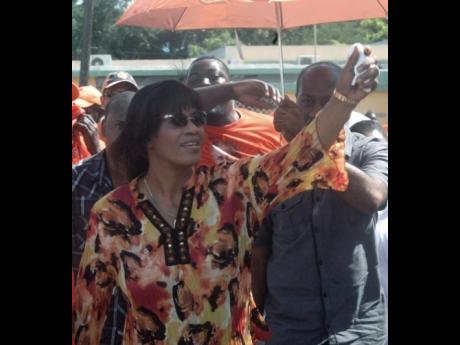 While there is no evidence to suggest that either the ruling People's National Party (PNP) or the opposition Jamaica Labour Party (JLP) subscribes to the view that 'where the west goes, the rest follows', both parties are now targeting the region ahead of the impending general election.

Two Sundays ago, both PNP leader Prime Minister Portia Simpson Miller and her JLP counterpart, Opposition Leader Andrew Holness, visited the west for high-profile political events, giving credence to the view that a major battle will be fought for the region's 16 parliamentary seats.

While Holness made no bold announcements, Simpson Miller, whose party won 12 of the region's 16 seats in the 2011 general election, was flushed with confidence, especially about Westmoreland, which she labelled, "PNP country".

"I understand the other gentleman (Andrew Holness) was here this afternoon," said Simpson Miller, while addressing Comrades at a mass meeting in Petersfield. "I want to say to that man: Don't Test Westmoreland; Westmoreland is PNP country."

However, while noting that it is the generally accepted view that 'where the west goes, the rest follows', respected western Jamaica-based political analyst Shallman Scott says the notion is nothing more than a long-standing fallacy.

"The view that whoever wins the west will be victorious at the national polls is a lie that has been repeated so often that people begin to treat it as if it was eternal truth," said Scott, a former mayor of Montego Bay. "It is not so. In 2007, the JLP won the elections, but the PNP won the west. So that by itself is an indicator that the Government can be formed without winning the majority of seats in the west."

While acknowledging that the PNP now enjoys a comfortable 12-4 advantage in the region, which comprises Trelawny, St James, Hanover, Westmoreland, and St Elizabeth, the astute Scott believes that the picture could change, especially in the marginal constituencies.

"You are looking at a present allocation of four seats for the JLP and 12 for the PNP. It is early days in the campaign, but what I am prepared to say at this point is that there could be some surprises in the west," said Scott. "The seats to watch carefully are South West St Elizabeth, Eastern Hanover, Central St James, and West Central St James. I believe that there are going to be some surprises."

While he has adopted a neutral position on the impending elections, businessman Davon Crump, a key stakeholder in the business process outsourcing (BPO) sector, wants the parties to bring real messages of hope to the people and not false promises.

"I want the political party that wants to lead our people to provide citizens with a vision of real hope, not just false promises to get votes," said Crump. "What we really need is an inclusive Government and a strong Opposition that understands that one doesn't just oppose for the sake of opposing, but one must be able to provide real alternative solutions to grow our economy. If we can attain this, it would be an indication of maturity in our political process."

However, one factor that both parties should be wary of is the growing apathy among potential voters, especially among the youth population.

"I do not think the political parties are equipped with any real solutions right now. What I realise is that the parties are still employing the old ways to do politics. It is all about the jump up, jump up, and the noise and the conflictual way of interacting with each other and with the people," said western Jamaica-based clinical psychologist Susaye Rattigan. "It's more about maintaining the status quo than about change or real concern for the people or the growth of the nation."

However, as the nation continues to await the sounding of the proverbial trumpet, which is the prerogative of Prime Minister Simpson Miller, it will be interesting to see what strategies the parties will employ in their respective bids to conquer the west.