Light it up, Ganja time in Negril * -…. Rootzfest/‘Cannabis Cup’ starts on Thursday* 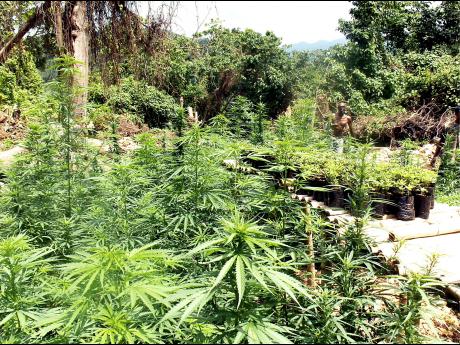 A Jamaican ganja field showing the 'herb' in various stages of cultivation.

For some long-time residents of Negril, this week's Cannabis Cup, which is being staged as an integral part of the inaugural Rastafari Rootz Fest, is a classic case of dÈj‡ vu for the resort town.

According to the residents, the event, which will be staged at Long Beach Park between Thursday and Sunday, evokes memories of the 1960s when ganja-

loving hippies from North American would descend on Negril to indulge in their free-living passion - smoking ganja in a relaxed environment.

"It is really the hippies who made Negril into a popular tourist destination," said Oniel Smith, a former Negril resident, who is returning to the town for this week's event. "While times have changed, with all these big hotels now a part of the landscape, Negril is still a fun-filled hideaway for North American visitors."

While the Cannabis Cup represent just a part of the event, which is being jointly staged by the Ras Iyah V-led Rastafari In Inity (RII) and High Times magazine, it is sparking much interest as it is the first high-profile ganja-related event to be staged in Jamaica since ganja was decriminalised in April.

"High Times are quite pleased to be having this event in Jamaica and we are equally happy to be hosting it," said Ras Iyah V, who is also the chairman of the Westmoreland Hemp and Ganja Farmers' Association. "There are much benefits to be derived from the staging of this event."

An integral part of the event will be the staging of lectures, seminars and workshops highlighting the science and technology behind the growing of ganja. This should prove quite important to local stakeholders, who have a commercial interest in ganja.

The Cannabis Cup, which was first staged in 1988, is the brainchild of Steven Hager, the founder of the acclaimed High Times magazine. Initially, it was staged in Amsterdam, but in 2010, it was taken to the United States for the first time.

With ganja an integral part of Rastafari 'livity,' the Cannabis Cup, which will see contestants being judged in categories such as best strain of ganja, the best new product, best booth, best glass and best hash, among other areas, should generate great interest.

The wider 'Rootz Fest', which is endorsed by the Ministry of Justice, the Jamaica Tourist Board (JTB), the Negril Chamber of Commerce, the Bob Marley Group of Companies and the Westmoreland Hemp and Ganja Farmers' Association, will feature art, craft, food, photographs and music, among other key features of the Rastafarian lifestyle.

For the lovers of roots/rock/reggae music, they should be in for a real treat as there will be three nights of back-to-back reggae concerts, featuring the likes of Tarrus Riley, Bushman, Luciano and I Wayne. There will also be sound system music, featuring noted outfits such as Mutabaruka's Blakk Muzik.

While the organisers are naturally thrilled about staging the event, at least one senior police officer in the region is not keen about the event being staged in the west. According to the officer, who asked not to be identified, had the police in the region had their way, no permit would have been granted for this event.

"We originally rejected the request for the permit, but it was approved higher up the chain of command in Kingston," the lawman said. "As far as I am concerned, smoking ganja in public is still illegal in Jamaica, so the police should not be out there having ganja smoke being blown into their faces and being asked to turn a blind eye."

At the Kingston launch of the event, Justice Minister Mark Golding, who was instrumental in the decriminalisation of ganja in Jamaica, urged participants to act responsibly during the staging of the event.