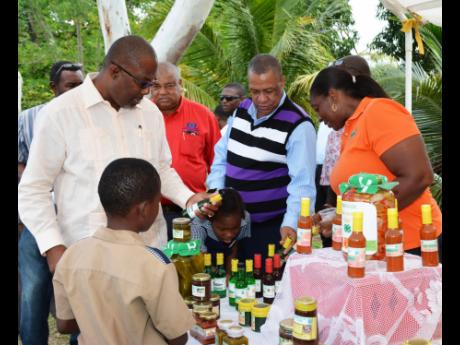 Vice-president of the Negril Chamber of Commerce (NCoC) Daniel Grizzle says that there has been a slight improvement in the ability of local farmers to supply the hotel sector's demand for fresh produce but that the needs still remain largely unmet.

"The situation hasn't arrived at where it should be, but it has greatly improved. I think that for a couple of years now, there has been some dialogue between the farming community and the hoteliers, which wasn't there before," Grizzle, a founding member of the NCoC, told Western Focus during an interview on Wednesday evening in Negril.

"In terms of being able to access enough - no, we haven't reached there as yet, and there still needs to be improved communication and a need to inform the farmers exactly what is required by the hotels," Grizzle, who also operates the Charela Inn resort in Negril, said.

In the case of Negril, Grizzle said it was the efforts of the Minister of Tourism, Dr Wykeham McNeill, and not the Ministry of Agriculture or its agencies, that resulted in the farmers' ability to forge the current linkages with the hotel sector there.

"I think really and truly you have to give credit to the minister of tourism ... . Dr McNeill really built on that and brought it forward through the tourism linkages programme. At least the farmers had a better idea of what was needed and when it was needed, and the hoteliers had an idea of what was available. Because for us local people, we have an idea of what's available, but you must admit you have a lot more food and beverage managers and chefs coming in from abroad, and they are not familiar with what we have," Grizzle added.

He said there has been marked improvement in the quality of string beans being sold by the farmers, but there were shortages in other important produce.

"One of the areas we have improved greatly is string beans. Finally, the farmers are reading into reaping the string beans at the correct time, and you are getting great local string beans. But there is a terrible shortage of tomatoes. You still don't get enough, I think, of local onions. We think there is a whole lot that needs to be done in terms of the production of onions," Grizzle said.

"I think in terms of things like parsley and herbs, there is still a big shortage because hotels use ton loads of herbs. And, of course, we buy the dry ones, but that's a standby for when you can't get the fresh ones. Smaller hotels buy their produce fresh, and tell you what, the guests taste the difference," he said.