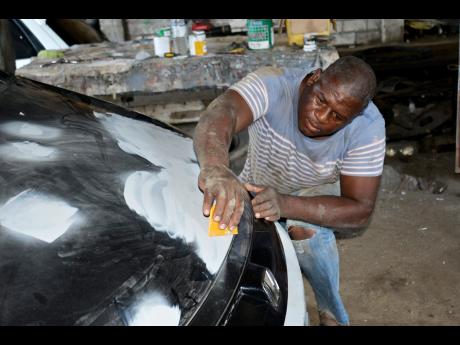 Richard Riley works on a motorcar at his auto bodywork and duco shop at Fraters’ Garage in Lucea.

When forty-three-year-old Richard Riley entered the auto body work and duco mechanic field, he was still a student at the Rusea's High School in Lucea, Hanover.

Twenty-five years later, Riley is still passionately engaged in the trade, with which he first became fascinated in the 1990s after witnessing the restoration of a crumbled section of a motor car, which had been involved in an accident.

"I had a friend who was doing body work, and after school in the evenings, I would go to his shop," recalled Riley. "But what got me really interested was that my cousin had a car then, and one day, he got into an accident and his car was looking like it had no use anymore. The same friend of mine worked on the car, and in the evening when I came home from school, I saw the transformation. It was fascinating to see how this crumbled thing came back."

After he graduated from high school, Riley decided that he wanted to go into the auto body work and duco mechanic field despite the fact that it was not a lucrative trade at the time.

"At that time, it was not so lucrative like now because there were few cars on the road," said Riley, recalling the way things were in the early '90s when he left school. "In the latter part of the 1990s, more cars, especially the ones popularly called 'deportees,' were being imported into the country and there were more and more collisions."

Today, Riley operates his business, the Richies Auto Specs, which is located at Fraters' Garage in Lucea. For Riley, the duco aspect of his job is the most technical as it calls for a lot of patience and most important, good vision and the ability to read and do basic mathematical calculations.

"Duco work is a never-ending learning situation. There are more colours coming out year after year, different tones, different everything, so matching a colour is very technical," said Riley. "A car will come down with a code and you go to the paint shop, which might give you the same colour, but the paint might be slightly off. It can be off because of the air pressure you use to apply it or because of the primer that is used to apply it. But you can correct that by adding toners, adjusting your air pressure, or darkening the prime area."