All set for 2015 Reggae Marathon in Negril 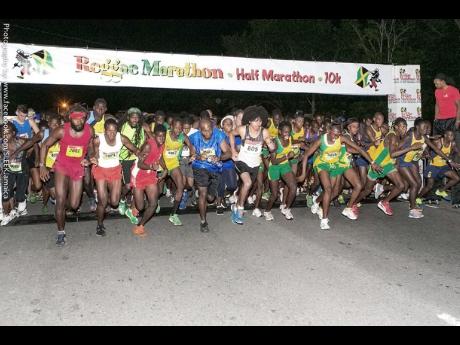 Runners at a previous staging of Reggae Marathon, Half Marathon & 10K in Negril.

Organisers of the 2015 Reggae Marathon, Half Marathon & 10K, which will be staged in Negril on the morning of Saturday, December 5, have said that they are in a state of complete readiness.

The event is in its 15th year. It has registered 30 per cent more participants than last year, prompting organisers to declare an unforgettable experience for local and international runners.

According to Ellis, the race will get under way at 5:15 a.m. at Long Bay Beach, along Negril's famed seven-mile white-sand beach. Participants will loop into the town of Negril, head north towards Green Island. They will return to Long Bay Beach Park to complete the event.

Ellis said water and aid stations will be at each mile, manned by experienced marathoners and other volunteers. In addition, at every mile post, there will be cooling stations with misters and iced towel wraps, as well as inspirational reggae music to soothe the minds, souls and bodies of the participants.

To ensure prompt medical assistance in case of any issue among runners, Ellis said medical stations will also be positioned along the course, staffed by a premier multi-disciplinary medical team, plus a helicopter on call for airlift.

At the end of the event, there will be a Finish Line Beach Bash at Long Bay Beach Park. The 'bash' will be followed by a Victory Beach Party and Awards ceremony, which will take place from 7 a.m. to noon.

"This year, it will be all systems go with the 15th anniversary celebratory atmosphere surrounding the event. Everyone is determined to pull out all the stops to make it an even more successful staging," said Ellis. "In addition, an aggressive marketing plan has resulted in registration numbers being over the usual increase."

"Last year, the event went well, and the organisers were heartened by the participation from so many different countries," said Ellis.

"However, there was a bit of a disappointment in the final number of participants, as the event was impacted by chik-V, which inflicted a number of local runners and caused them to withdraw. In addition, some of the international runners changed their minds and did not show up for fear of contracting the virus."

One factor that might affect the event is a shortage of hotel rooms. A number of properties in Negril are closed for refurbishing.