The west savaged by multiple murders 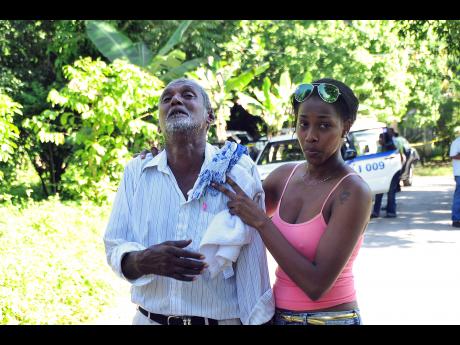 Adrian Frater
Errol Mangaroo (left), is being comforted by a family member as he mourns the death of his son Byron, who was recently murdered in Logwood.

Despite the many crime-fighting initiatives the police have tried in their quest to rein in lawlessness, the year 2015 will go down in history as the most murderous in the annals of western Jamaica, especially in regards to the parishes of Hanover and Westmoreland.

Up to mid-October, Hanover, which was the nation's most peaceful parish up until a decade ago, had registered 54 murders - the highest murder count in any one year in the parish's history.

During October, the situation reached crisis proportions when six members of one family were slaughtered by gunmen and their ten apartment board house burnt to the ground. Four other family members were injured in the attack.

A month earlier, between Sunday, September 13; and Saturday, September 19, Hanover registered seven murders in rapid succession. The incidents included a triple murder in St Simon and a double-murder in Georgia.

The murders, the majority of which took place in the Lucea police district, has elevated Hanover to the second most murderous parish in the island behind St James, which is closing in on 200 murders this year.

In Westmoreland, which has emerged as a major crime hot spot in recent years, the parish has witnessed several cases of multiple murders this year. In July, 53 year old Rose Murray and her daughter Latoya Daley were shot dead in their Little London home in the presence of two children.

Earlier this year, the parish also had a quadruple murder in Whithorn District, where 14 year old Shawn Clayton, 20-year-old Romario Drummond, 22-year-old Theodore Tennant and 16-year-old Demar Doeman, were attacked and murdered while playing video games at a business established in the community. The police subsequently linked the killings to the illicit lottery scam.

In St James, which has been the haven for rampant criminality since the emergence of the lottery scam in 2006, multiple murders has become common place. The month of July stood out as in the 24 hour period between July 16 and 17, seven persons were murdered in different incidents. The carnage, which started in Norwood, ended on the streets of downtown Montego Bay.

The persons killed in Norwood were, 31-year-old Sean Hudson, 40 years old David Dilbert and his 31-year-old relative, Patrick Williams. The other persons killed elsewhere were: 63-year-old taxi-operator Phillip Campbell and his 42-year-old nephew, Kevin Campbell, of Rose Heights; and craft vendor Elizabeth Robinson, who was killed in the heart of downtown Montego Bay.

Within recent weeks, on the advice of the National Security Minister, Peter Bunting, soldiers have been deployed to the main crime hotspots across the region while the leadership in the various police divisions have been strengthened in a new resolve to battle the lawlessness.