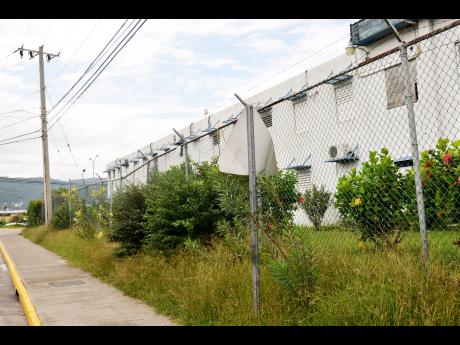 Christopher Thomas
A section of the Freeport Police Station in Montego Bay, St. James, showing the perimeter fence over which six prisoners reportedly made their escape.

With crime currently at an intimidating level in western Jamaica, the escape of eight accused murderers in recent jailbreaks in St James and Westmoreland has left one of region's top crime-fighters extremely unhappy, if not totally flustered.

"It is never the best thing to see (this) happen. As a divisional commander, where you work hard to take the people who are wanted for crimes committed in your division or elsewhere (off the streets) only to have them break out of custody because of our (police) negligence," said Senior Superintendent of Police, Steve McGregor, the commanding officer of the St James Police Division.

Last Monday morning, residents in St James woke up to the disturbing news that six prisoners, inclusive of four accused murderers, had tunnelled their way out of the lock-up at the Freeport Police Station and are now on the run. This incident comes just over five months after eight prisoners, inclusive of four persons charged with murder, broke free from the lock-up at the Savanna-la-Mar Police Station in Westmoreland.

While the police high command is intimating that negligence played a part in the escape of the prisoners, especially those in St James, investigations by Western Focus have revealed that poor supervision by senior officers and faulty infrastructures may also have contributed significantly.

"It is no secret that sections of the cell bloc at Freeport has been falling apart for some," a police source told Western Focus. "The plumbing system has become faulty and some cells have had to be condemned and abandoned."

In the Freeport jailbreak, it is believed that prisoners exploited the weakened wall behind a defective toilet bowl and gradually created a hole big enough to facilitate their escape.

"If the physical checks of the cells, which the senior officers are mandated to do, were being done, they might have uncovered the flaw and took the preventive measures to foil the jailbreak," continued the lawman. "It was the senior personnel who were negligent, not the persons on duty at the cell bloc."

In the jailbreak in Savanna-la-Mar, those prisoners reportedly utilised the same modus operandi, digging their way through a wall in their cell and making good their escape.

Like the case at Freeport, it is believed that the breaching of the lock-up wall in Savanna-la-Mar took several days to be completed, giving credence to the view that, had the senior personnel been doing their mandated inspections, the jailbreak could have been foiled.

Interestingly, in a recent interview with Western Focus, Justice of the Peace, Howard Deers, who makes monthly visits to the lock-up at Freeport in his capacity as a member of the St James Lay Magistrate's Association, spoke of physical deficiencies at the facility, which are not being addressed.

"The bathrooms in the female section need urgent attention. We have brought it to the attention of the authorities, but nothing has been done," said Deers, who, nonetheless, expressed much surprise about the escape of the prisoners.

Regardless of what factors contributed to the recent jailbreaks, with St James having more than 200 murders since the start of the year, Westmoreland an unprecedented 99, and Hanover a record 56 killings, having more accused killers back on the streets must be a frightening scenario for all law-abiding citizens.